Making things portable usually means there is some form of compromise. But having a portable device also means expanding the ways you use technology. Although laptops and tablets have existed for over a decade now, there is still space for something that walks the fine line of offering the best from both components in a nice little package. That’s where the GPD WIN comes into play as it's a small clamshell device that has the full power of Windows 10 with a touchscreen display and physical inputs like a keyboard and game controller. So where does the WIN land in the gamut of devices available today? 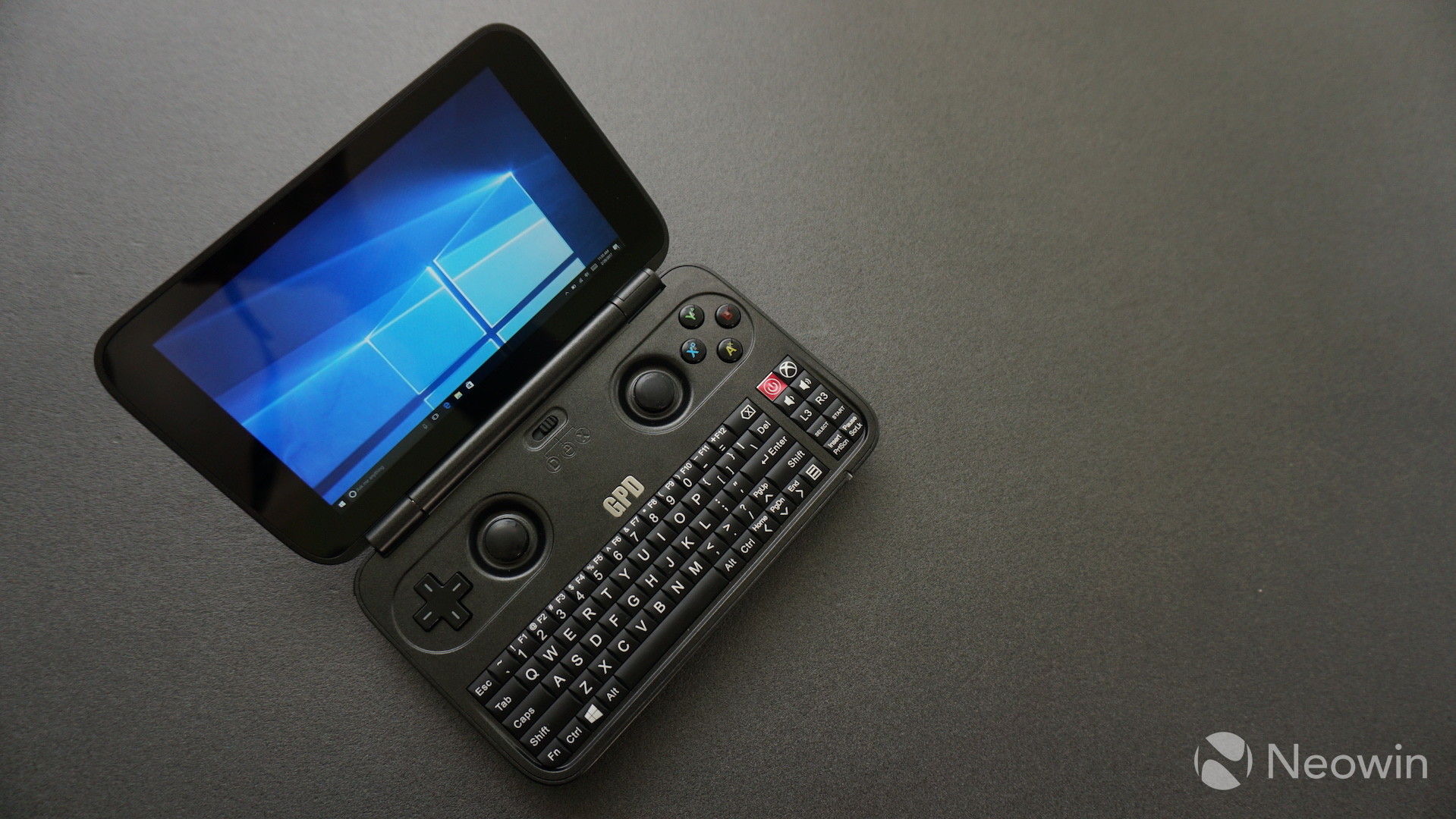 The GPD WIN has a fairly unique design when compared to other Windows 10 devices that I have reviewed to date. The exterior is made from plastic and offers a nice sheen but isn’t fully glossy. When closed, the majority of the attention will focus on the rear of the device since it houses the ports - USB Type-C, mini HDMI, microSD, USB 3.0, 3.5mm headphone jack, and four trigger buttons (two on each side). Beyond that, there are slits for ventilation on the front, speaker grills on the right and left sides, and a switch to control fan speed on the bottom. 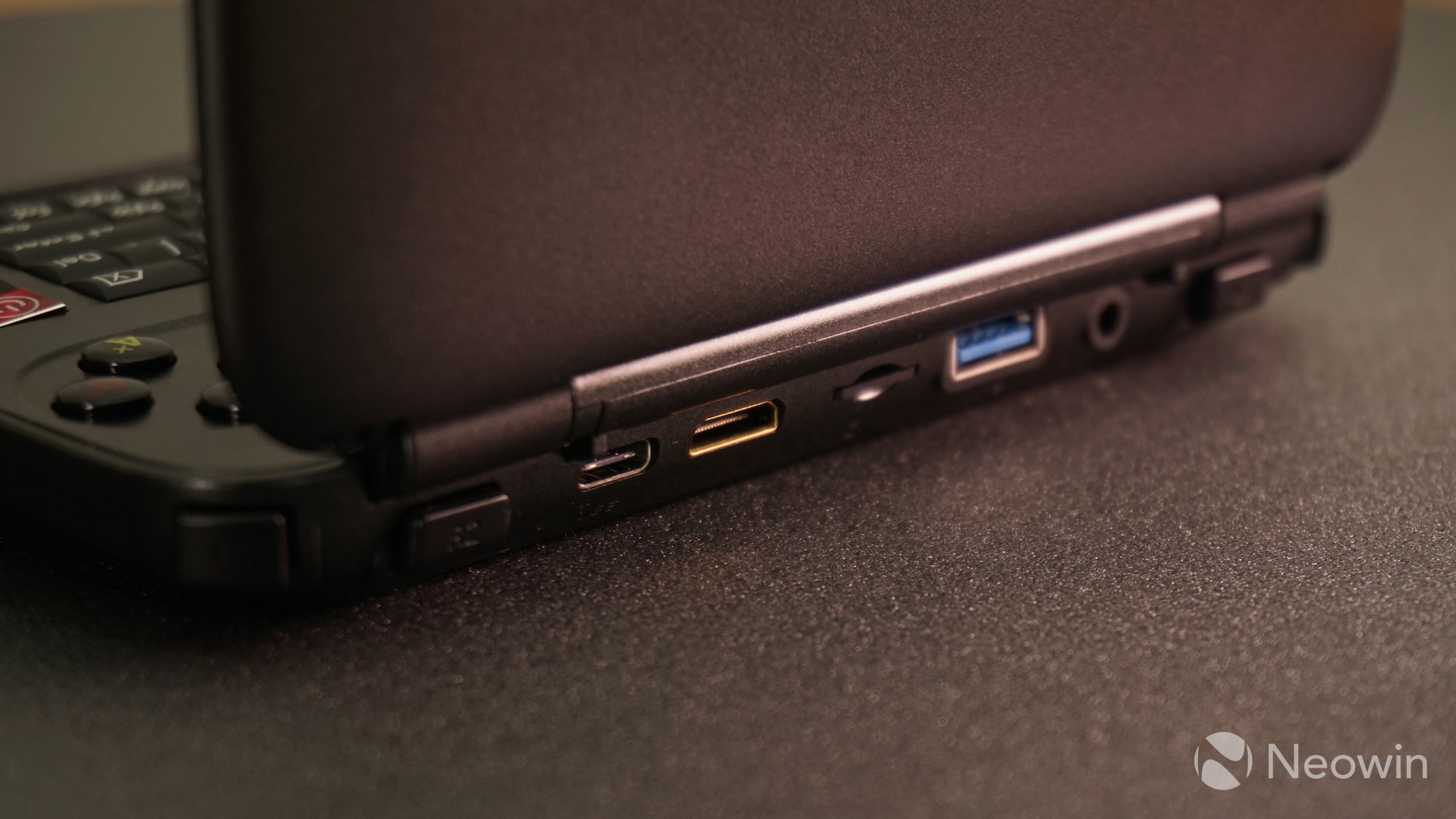 The real interesting part happens when you open up the device to reveal its 5.5-inch 720p touchscreen display, gaming controls, and QWERTY keyboard. There is also a toggle switch to customize the way the thumbsticks function. While it might not be the most flamboyant device, everything seems fairly well designed and laid out. This is expected since GPD has been producing Android devices in a similar style for quite some time. All in all, this is a very comfortable device to hold for hours on end and can still be stowed in a small bag or maybe in a larger pant or coat pocket. 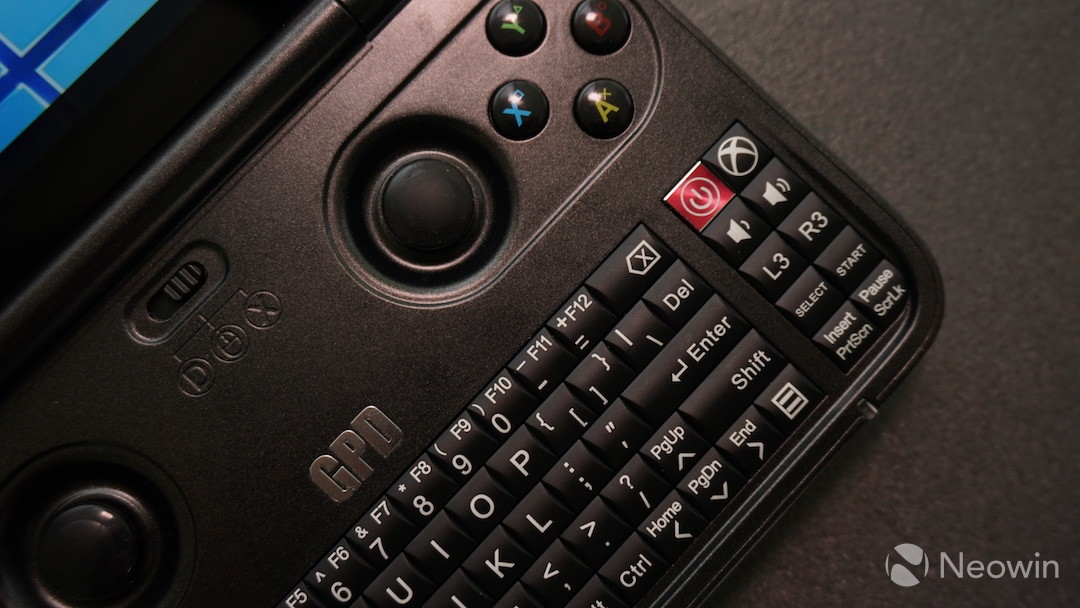 Although the WIN offers a full keyboard, the unit is clearly a gaming device first, and everything else second. So, let me start by saying that the gaming controls feel comfortable. They are all positioned fairly well with exception to the secondary set of triggers, which in my opinion would have worked better stacked. But, that’s a compromise I think is necessary in order to keep the device compact. 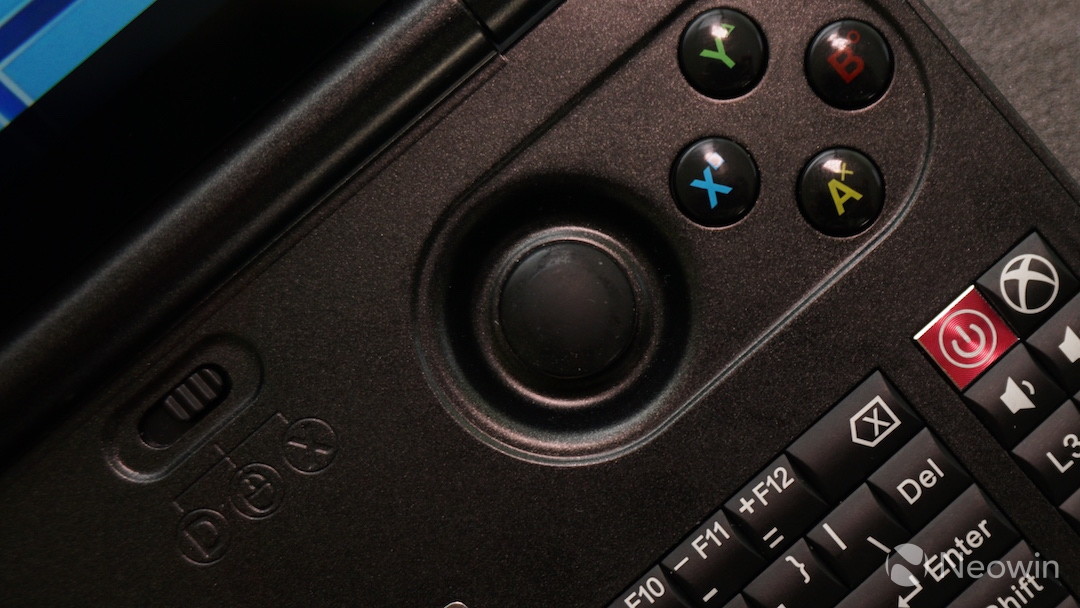 As for the thumbsticks and buttons, they have good movement and travel. One thing that I did not like about the thumbsticks is that they are covered with a silicone material that provides good grip but also tends to attract lint and other particles. There is also the concern with durability, as the applied coat feels a little thin. Those that have a heavy reliance on the D-pad will be sorely disappointed with the WIN’s offering as it is not very good. While on first impressions it feels okay, there is a lack of tactile feedback when it comes to the diagonal corners. While it is tough to describe, it feels a bit mushy which can make certain commands tough to execute - think “Shoryuken” and you’ll understand what I’m talking about. 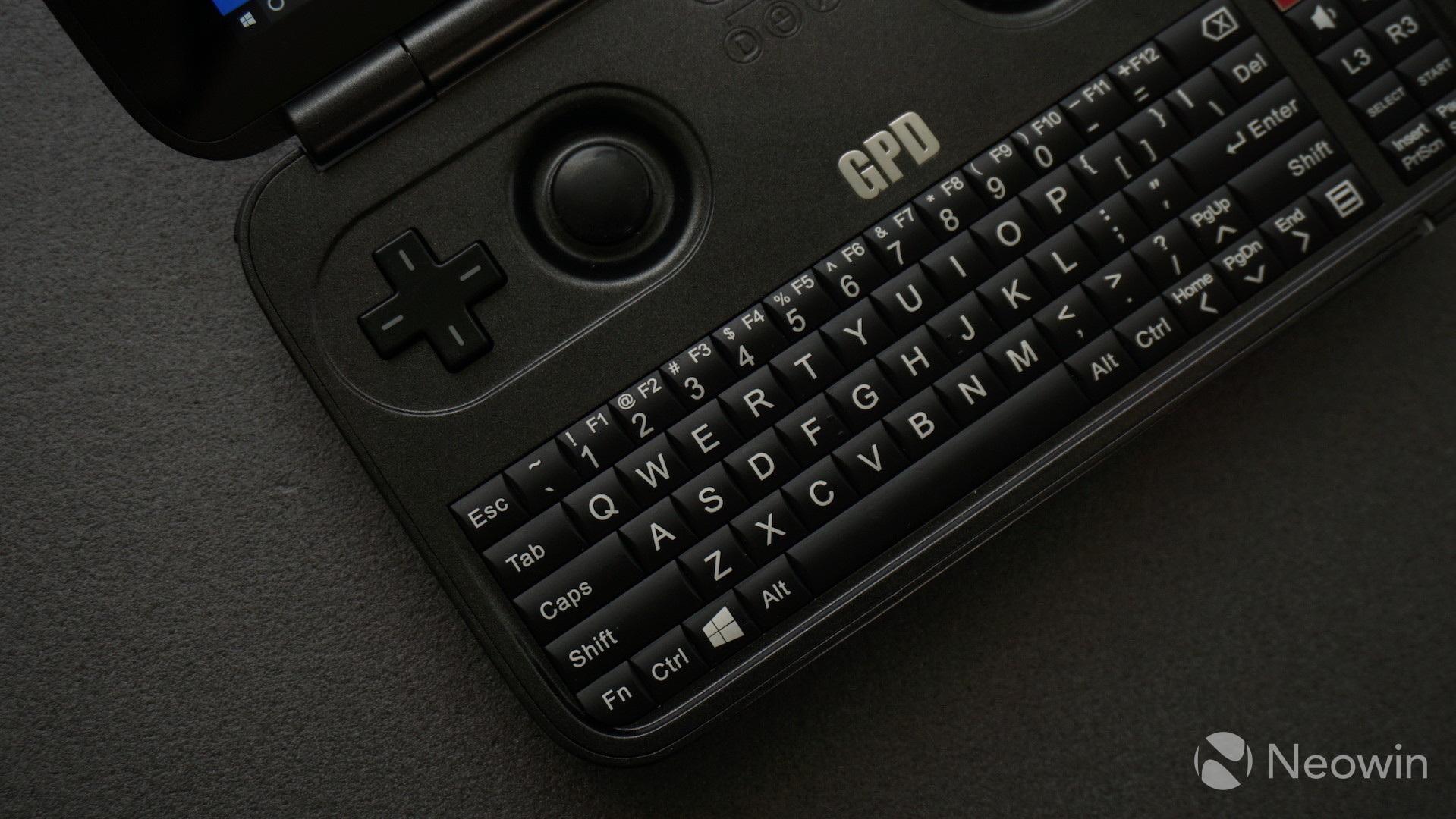 If unfamiliar with the above term, as an example, when moving from down to down diagonal right to right, there is usually a distinct feeling in that diagonal right portion that distinguishes it from the other directions. However, on the WIN, this subtle yet crucial feeling is missing. If anything it feels as though the D-pad has positions for the diagonal directions, but doesn’t have the ability to pivot out of that direction smoothly. Again, the command still registers, you just don’t get the feedback necessary to understand that it is actually being accepted. 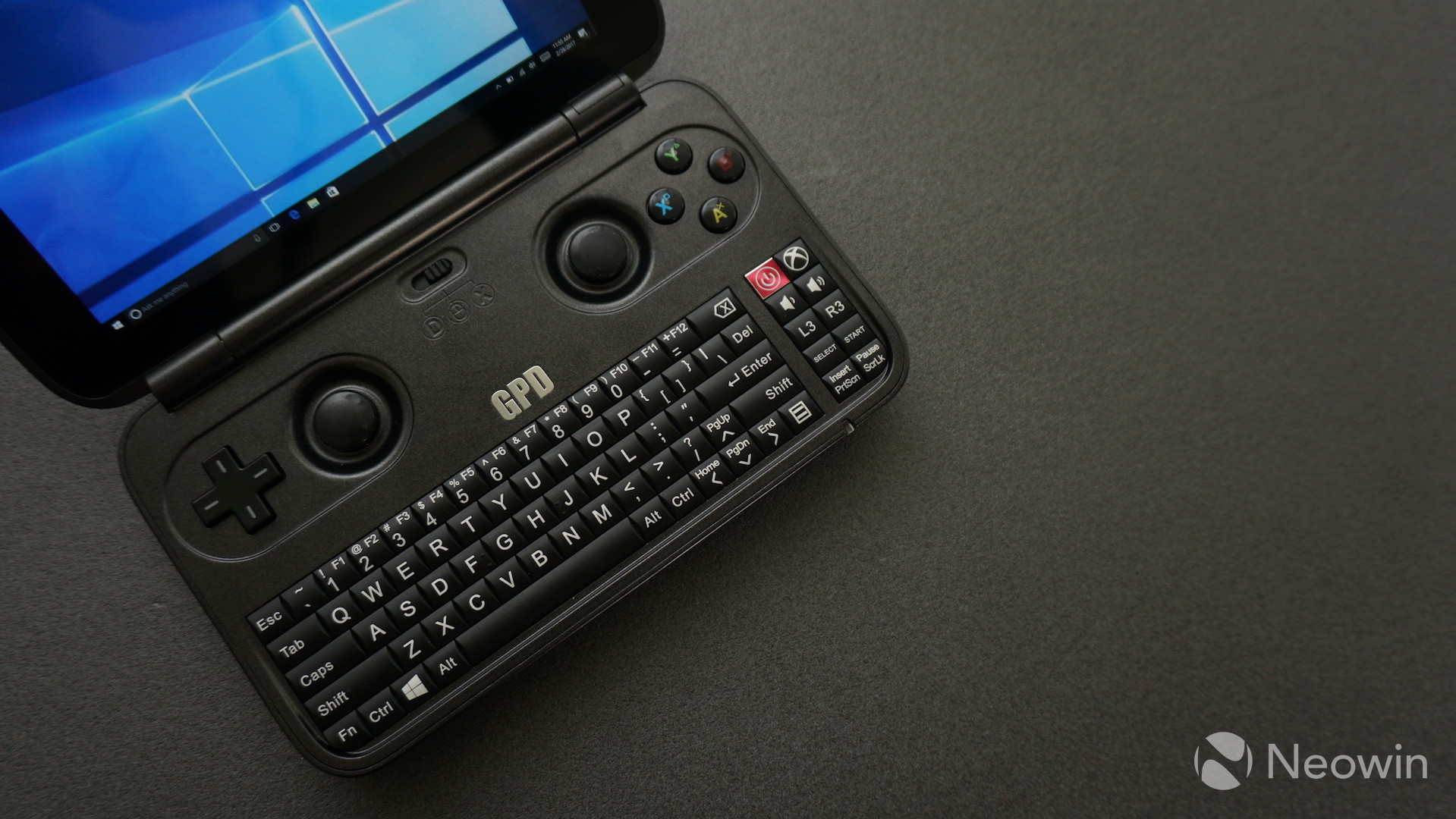 Now to the keyboard - where to start. The keyboard is decent and transports me back to a time when Pocket PCs were popular and plentiful. Yes, I’m talking about Windows Mobile handsets with physical keyboards like the HTC TyTN or similar variant. It isn’t the most comfortable to use, but it gets the job done when in a pinch. In all honestly, I tried using it to type out full-length articles and it can be done, and although it is accurate once you get the hang of it, it feels inefficient compared to using a touchscreen, maybe because the keyboard is a tad bit too wide. 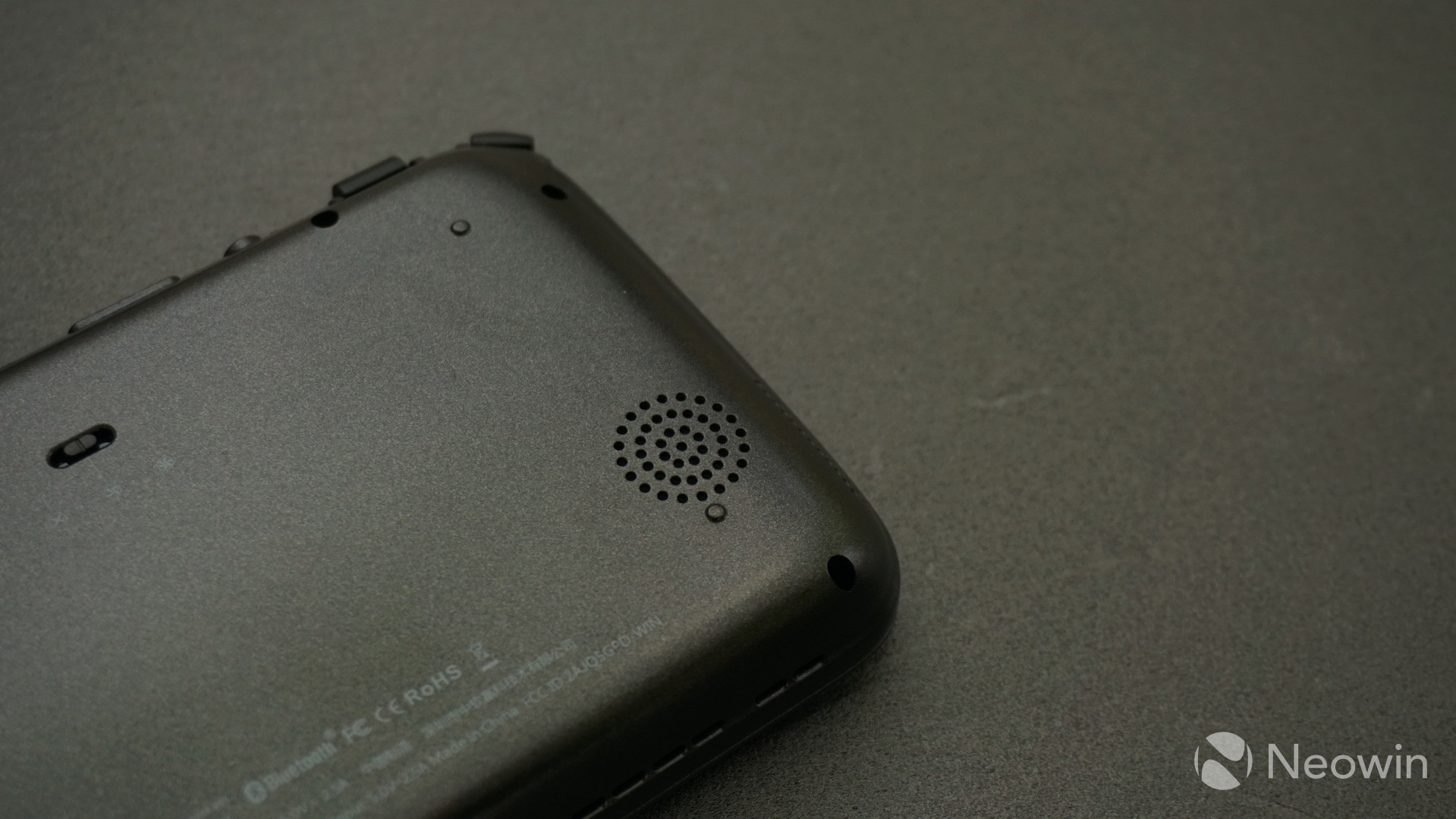 As for sound, the speakers can get pretty loud, but they never sound full. Also, the positioning of the speakers near the palms is a bit hit and miss. While I didn't experience any issues with covering them while playing, it can become an issue depending on how you hold the device. 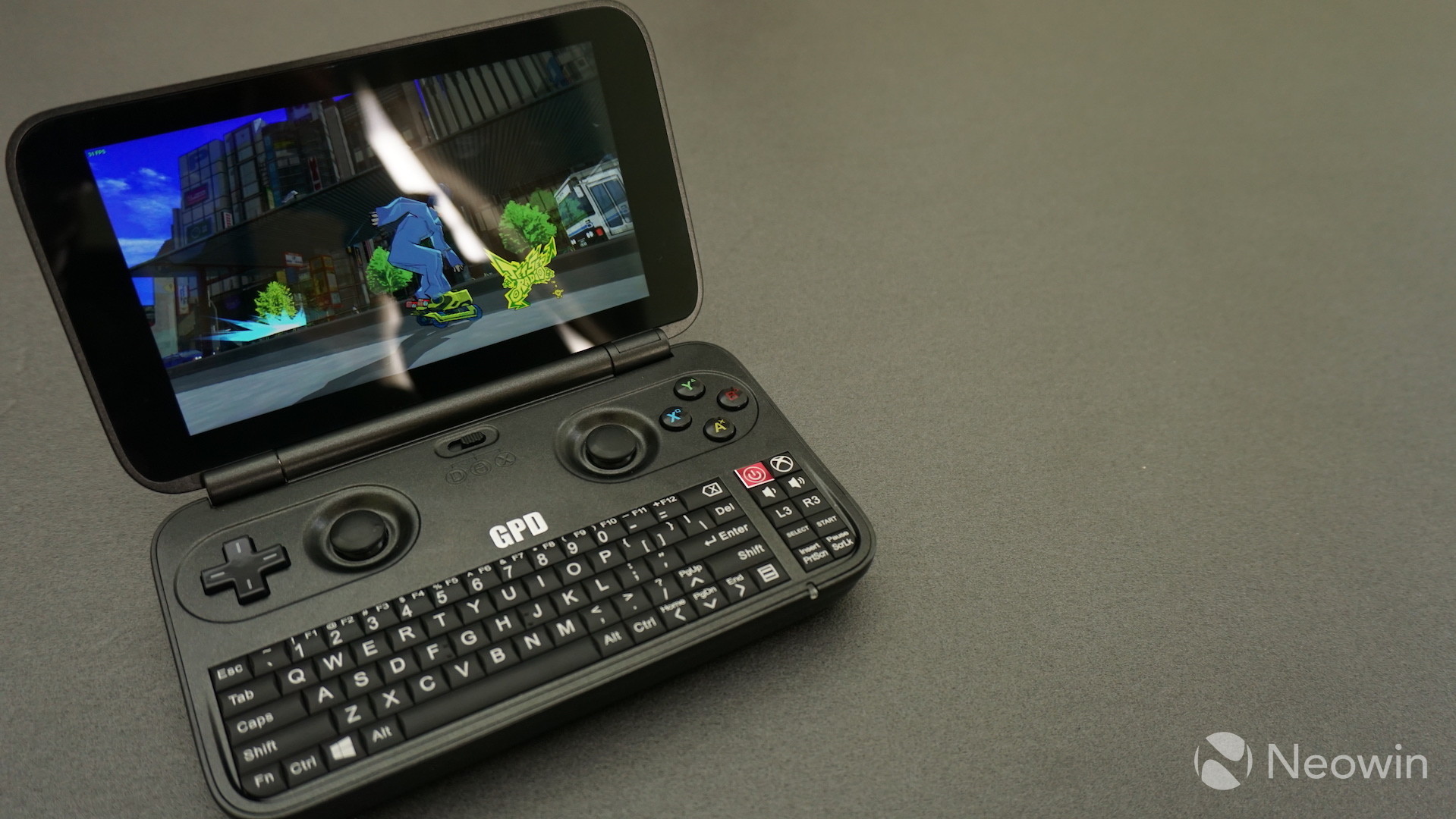 Like many smaller Windows 10 devices, the WIN is powered by a mobile processor in the form of the Intel Atom X7 Z8700. It also packs 4GB RAM and has 64GB of storage space which can be upgraded using microSD cards. If you play a lot of games, you’ll definitely be needing this. 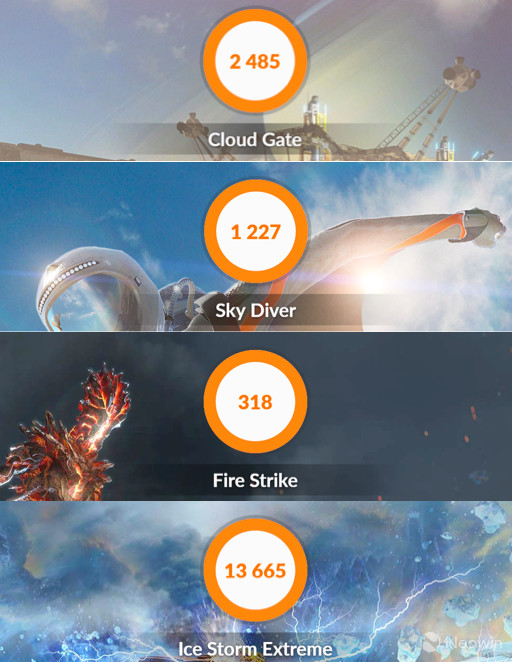 So how does the Intel Atom perform? It can actually handle quite a bit. With normal day-to-day use like word processing or web surfing, everything runs smooth without issue. But, if you really want to start testing the processor, it only takes some intense modern games to bring it to its knees. You probably won’t be playing the latest and greatest, but if you are a casual gamer or someone that likes older titles, the GPD WIN is probably going to work well for you. 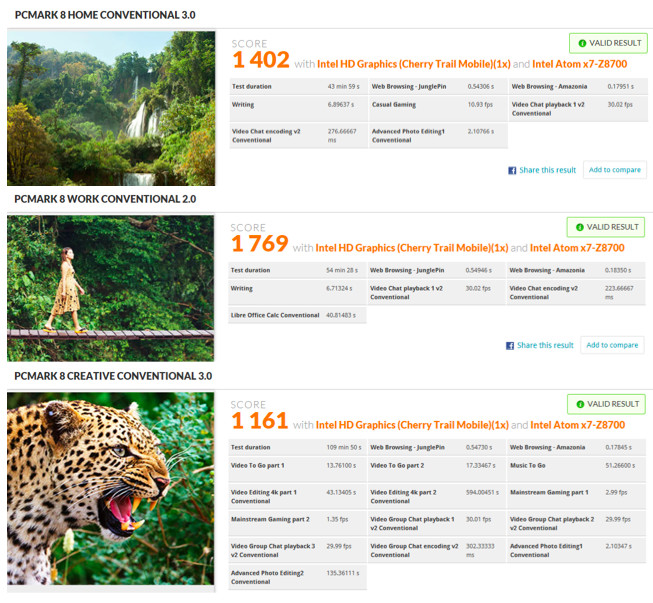 As an example, playing classic titles like Castle Crashers I was able to maintain a relatively high frame rate of around 50-60fps. While diving into slightly more intense titles like Jet Set Radio and Team Fortress 2 saw my frame rate flutter at around 30fps. Stepping it up with titles like Batman: Arkham City, I was seeing average frame rates of about 15fps. While this isn’t completely terrible, in some of the more intense areas, it feels like you are fighting in slow motion. Per usual, benchmark numbers have been posted above with 3DMark on the top and PC Mark 8 on the bottom. 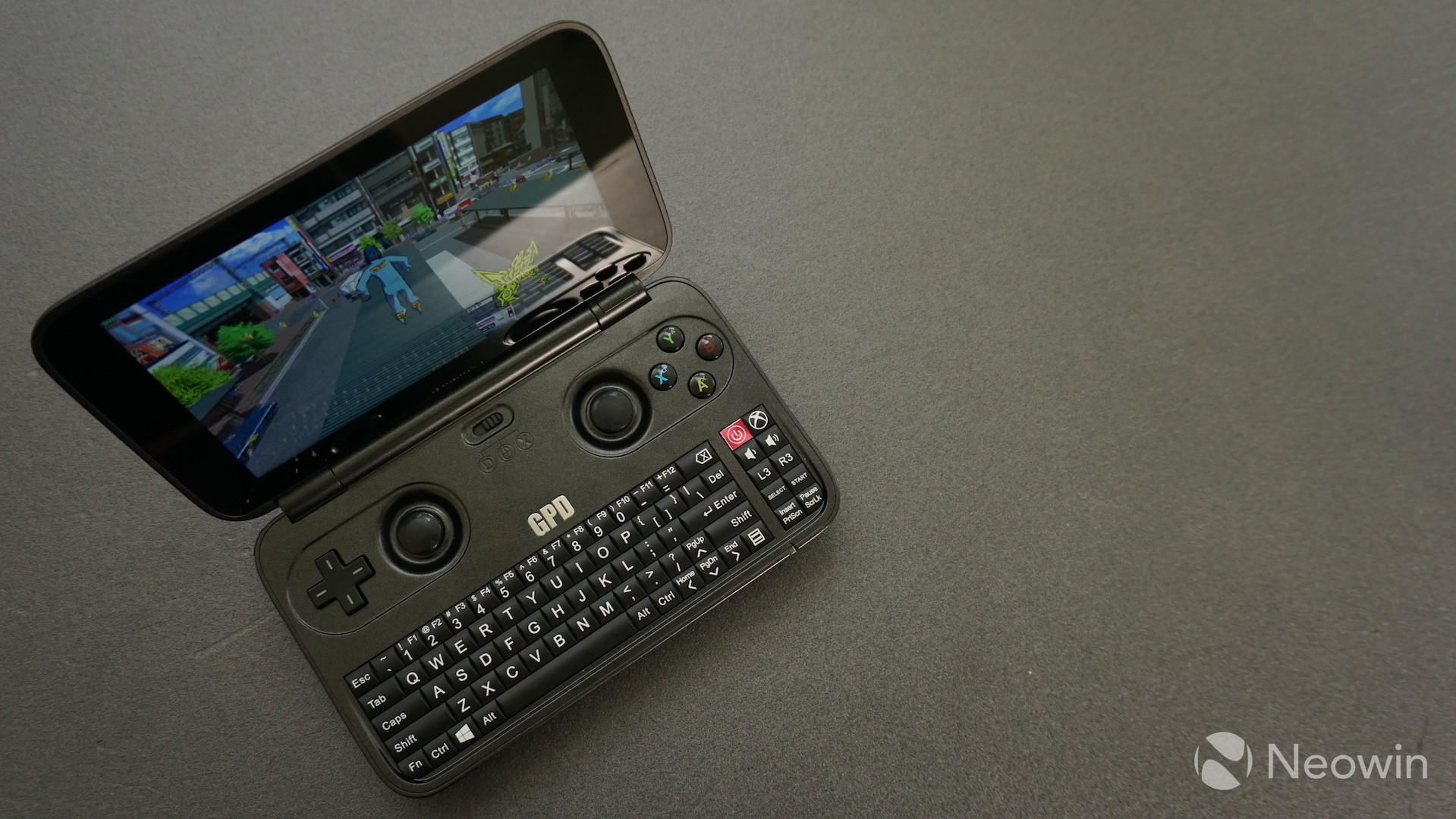 If you’re adamant about playing newer titles, you can always tweak the resolution and also head to the GPD Reddit where there are a ton of tips on how to maximize your unit. If you opt not to go through the grueling task of flashing firmwares, you’ll be left with a unit that can play less intense titles and can also do a fair share of emulation. Another option for those that are adamant about proper gaming, you can choose to utilize streaming services that will offload a lot of the processing to an in-home computer or cloud service. I did not try this solution, but I have heard from others that the WIN can handle these types of services and it is a very effective method of getting around the handheld's limitations. 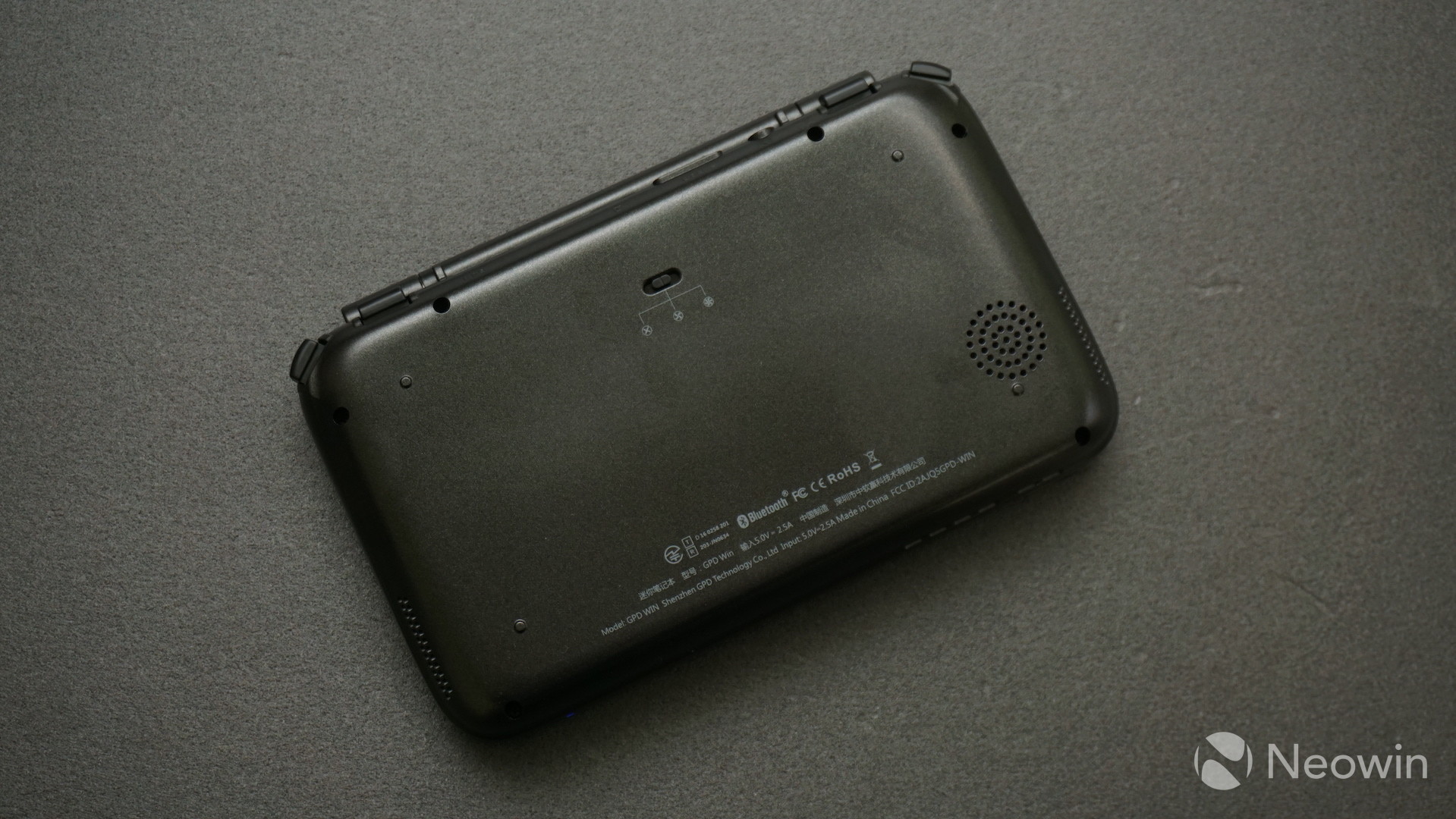 As for battery life, the 6,700mAh battery will last about six hours on a single charge, doing basic things like surfing the web or watching YouTube. But, once you start gaming, it will last about half that, as I was able to achieve around 3 hours. While this is pretty decent for a handheld, the charging times is what really kills the experience as it takes about 3 hours and 30 minutes to fully charge the unit. Luckily, it uses USB Type-C, so you can charge it on the go using a power bank or a standard USB charger. Naturally, the rate of charge will vary depending on your charger, but to get the best results you’ll probably want to stick with the one that is included in the box or something similar.

The GPD WIN is a good little device to be used on the go. It can handle a wide variety of tasks, but it is clearly geared towards someone that wants a versatile portable gaming device. While the controls aren’t perfect, they work well in most applications, if the software supports it. Currently, there are a few portable gaming machines on the market, but the WIN is probably the most flexible and will be the best option when it comes to versatility due to its ability to run Windows 10 and apps for the platform. With that said, the device isn't the cheapest portable on the market and if you're a gamer, $350 can buy you a lot of machine. It really comes down to whether this device will do all the things you need it to and if a portable Windows 10 device is what you need.

I'd like to extend a big 'Thank You' to the folks at GearBest who supplied the GPD WIN for this review. If you are interested in purchasing this device, you can pick it up from their website. You can use coupon code "GPD28 " to purchase it at a reduced price of $319.99. You can check out more at GPD's official product page.