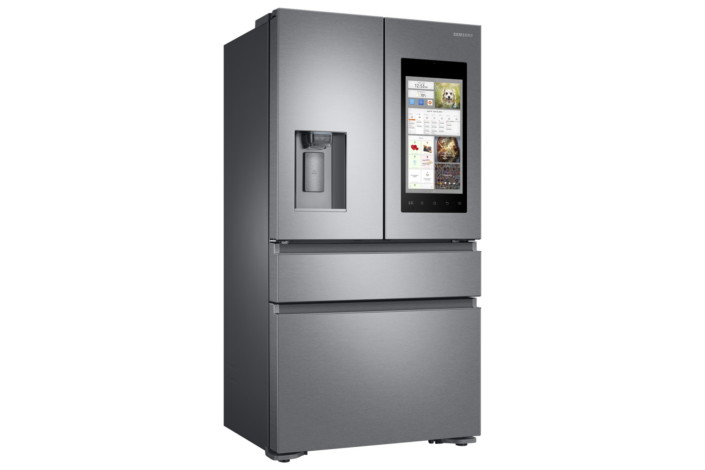 Samsung has unveiled an expanded range of smart fridges at CES 2017 in an 'anniversary update' (no relation) to the range. The devices, which now form a range of ten differing models in addition to those previously launched, come with Family Hub 2.0 - an updated version of last year's software.

Displayed on a 21.5-inch screen on the front of the device, Family Hub 2.0 is designed to revolve around family life, allowing individuals to create a profile, connect it to their smartphone and upload things like photos, memos and handwritten messages in real time, including when they're not at home.

Family Hub 2.0 also features collaborations with app partners such as Grubhub, Nomiku, Glympse, Ring, Spotify, and iHeartRadio. There are new local grocery partners joining the platform too, such as supermarket giant Lidl in Europe.

Competing with LG, which utilizes Windows 10 and Cortana on its smart refrigerator, users can interact with Samsung's fridges using voice commands as well as through the built-in touchscreen. Tasks like ordering groceries or adding items to lists and memos are intended to be easy using Samsung's voice technology, with more apps now supported than ever before.

Whether you need a smart refrigerator is one thing, but it's hard to deny that being able to update your shopping list when your hands are covered in breadcrumbs, or leaving notes on the fridge after you've already left home, are quite cool features nonetheless. And yes, pun intended.