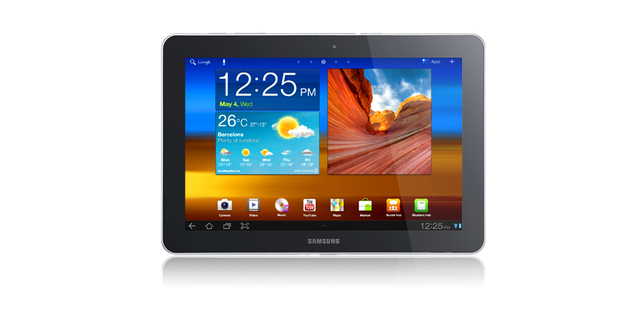 Samsung's Galaxy Tab 10.1 tablet will not go on sale in Australia for at least another month as a patent infringement battle with Apple drags on.

Samsung had hoped to begin selling its tablet in Australia around September 12, according to The Sydney Morning Herald. That date has now been pushed back until at least September 30 after Apple successfully argued for a new hearing based on the modified sample given to the Cupertino company.

The original Australian ban on sales of the tablet began in July. Samsung also today agreed to provide Apple with 48 hours notice before it planned to sell the Galaxy Tab 10.1. Documents obtained by itnews show that one patent at the core of the Samsung case was granted to Apple less than a week ago, and retroactively applied from 2009.

Running to 40 pages, it covers how a touchscreen device responds to multitouch interactions and links those to parts of a device's screen. Apple is also arguing the Galaxy Tab copies the ''look and feel'' of the iPad, though Samsung has argued the design of Apple's tablet is derivative of earlier devices and therefore not original.

Samsung also told the court today it plans to counter-sue Apple for infringing a number of its patents in the design of the iPad, though those claims are likely to be split into a separate case, experts have said.

A ban on the sale of the Galaxy Tab 10.1 also remains in Germany, although a court earlier this month lifted a ban on sales in almost all European Union countries.

The case will return to court on September 26 and 29, with top inventors from Samsung and Apple expected to appear in person or via video link to give evidence.