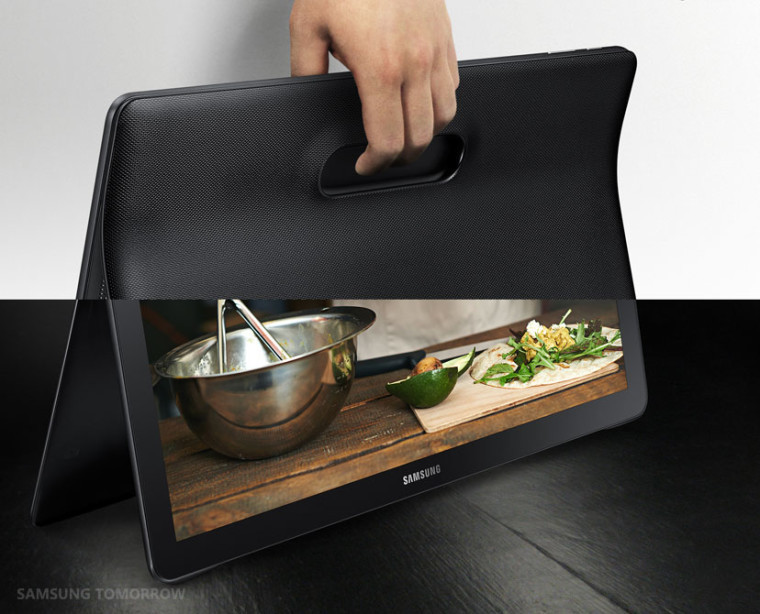 Last month, Samsung posted teasers for the Galaxy View tablet and although the company tried to keep things under wraps, the device's images managed to leak a couple of weeks ago. Now, the 18.4-inch tablet has been officially announced by the company.

Samsung expects the Android 5.1 Lollipop-powered tablet to offer a unique entertainment experience and has customized the OS to bring media front and center to the users. Although the Galaxy View has a huge screen (for a tablet), its resolution is just 1080p. It comes with a kickstand to prop it up for watching video, and a handle to carry it around. Samsung has included two 4W speakers and promises high-quality output on the device.

On the inside, the tablet is powered by an octa-core Exynos processor clocked at 1.6 GHz, and 2 GB of RAM. It comes with 32 GB and 64 GB storage options which can be further expanded using a microSD card. The battery is rated at 5700 mAh and Samsung says that it should be good for around 8 hours of video playback. It also has a front facing 2.1 megapixel camera, while connectivity options include Wi-Fi and LTE (using a nano-sim).

The pricing and availability of the Galaxy View has not been revealed by Samsung but we will know more when the tablet is announced in various markets in the near future.