If you're attempting to take some cash out from an ATM in East London this week then the question "some moolah for ya sky rocket?" may be greeting you shortly.

Confused? You might well be, it's a new initiative in the UK by the company Bank Machine, which runs 2,500 ATMs across the country. The company is aiming to keep dialects alive in Britain. The first round of machines have an English or Cockney Rhyming slang option. If you're not familiar with Cockney Rhyming slang then checkout the unofficial dictionary. The company hopes to follow the Cockney cash machines with Brummie, Geordie, Scouse and Scots ATMs in the future.

Roy Parker, 62, a bona fide Cockney, was working behind the counter of a mini-cab firm. The times of London interviewed him about the new machines. "Real Cockneys don't have bank accounts or all that palava," he said. "They put it under the mattress." 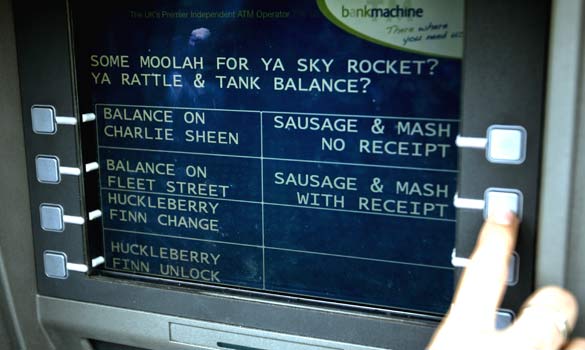