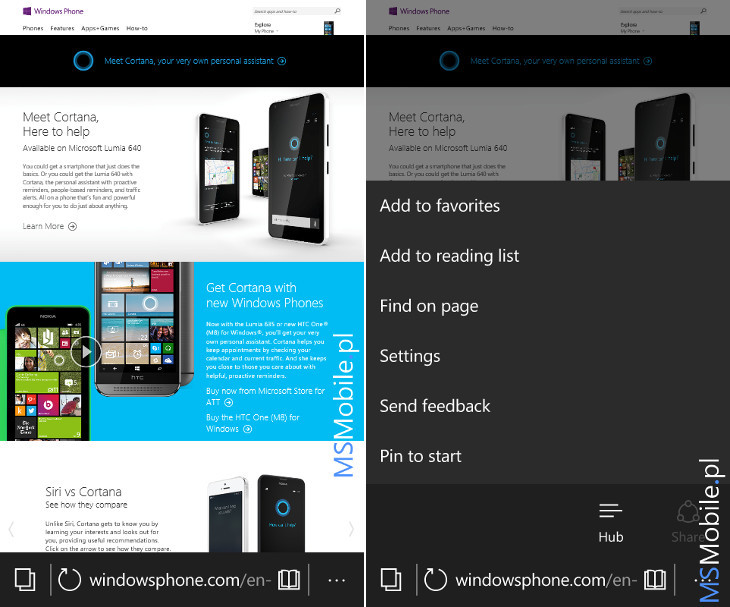 We heard just yesterday from Gabe Aul, General Manager for the Operating Systems Group at Microsoft, that both the candidates for mobile and PC variants of the Windows 10 preview are looking "promising". We now have a better idea of what the next Windows 10 Mobile build may look like with a series of leaked screenshots from Build 10149.

@j1cordingley @AndreAramis254 We have candidates for both PC and phone builds that look promising. Reviewing issues and deciding soon.

These screenshots show a number of different changes and improvements throughout. One of the big changes in particular is to Microsoft's new browser, Project Spartan, has finally gotten its rebranding along with the Edge logo. Along with this change in Build 10149 we find the address bar in Edge has moved its home to the bottom side of the screen. This suggestion/complaint has been one of the most popular, gathering over 1000 collective votes on the feedback app.

Not only has the address bar moved but it has also gained some extra functionality. Besides being merged with the ellipsis menu, it has gained a button where you can quickly access your tabs. Like Windows Phone 8.1, you will mostly likely be able to change this to the functionality of your liking. The other buttons, 'Hub' and 'Share' are still available under the ellipsiss menu.

There are several minor changes as well:

As you can see, there are quite a few changes in this build and we will probably see things on the mobile side begin to pick up even more as Microsoft shifts its focus with the release date of Windows 10 for PC quickly approaching. Windows Insiders got Windows 10 Mobile build 10136 just over ten days ago, but the next build, whatever number it might be, is gearing up to be a pretty exciting one. You can check out all the leaked screenshots in the gallery bellow.