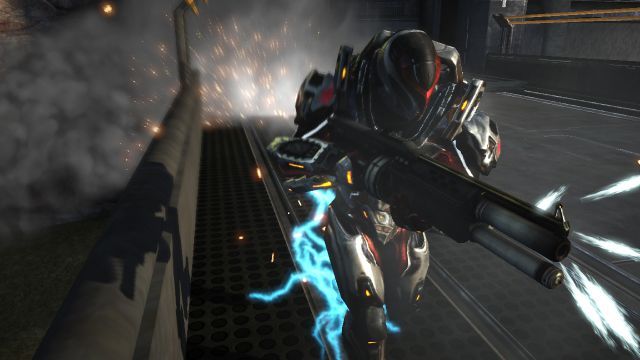 Two weeks after it was released via download for the Xbox 360, Section 8 Prejudice is now available to purchase and download for PC owners. The sci-fi first person shooter from developer Timegate Studios can be downloaded via several sites, including Steam, Impulse, Direct2Drive and others, for $14.99.

The game, a sequel to the 2009 released Section 8, contains a five hour single player campaign along with a number of maps and multiplayer modes with support for up to  32 online players. The PC version includes some extras not found in the Xbox 360 version. This includes support for viewing the game in 3D via Nvidia's 3D Vision glasses and supported monitors. The PC port also supports the small LCD screen found on the Logitech G15 and G19 gaming keyboards. People with those keyboards can take a look at in-game stats that compare your score to the top three Section 8 Prejudice players. It can also show players a loadout with your in-game weapons and ammo and also your last in-game achievements, badges and other items.

PC players can also join their Xbox 360 counterparts to unlock a new gameplay mode in the game. Timegate says  that after 10 million in-game kills have been reached (with a combo of both C and Xbox 360 kills), Timegate will unlock the team-based Assault mode for both versions of the game. At the time this news post is being written, the kill counter on the game's official web site is near the 7 million mark.