Microsoft not only went ahead and released a new Windows desktop version of Skype today, but it has also launched a new update of the app for Windows Phone 8 and 7.5 devices via the Windows Phone store. 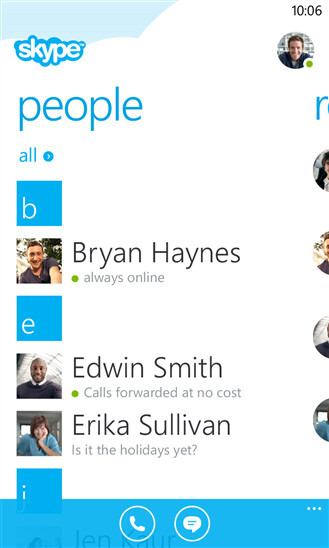 The official Skype blog has the change notes from the new 2.6 version of the app, indicating that it is a rather minor update. The blog says, "In this release we focused on further increasing the reliability of chat and call notifications, improving reliability of calls to phone numbers and resolving occasional missing message preview in the recent conversations list."

This new version of the Windows Phone 8 app does not have the video messaging feature that other mobile and desktop version of Skype have added over the past few months. It was first put into the Mac desktop and iOS and Android apps in February, and in late April the Windows 7 and 8 desktop beta versions also added the feature. Earlier this month, the Windows 8 Modern app got an update that also added the video messaging feature. Microsoft has given no indications when the Windows Phone app will add this feature but we suspect they are likely working to get it into the application in the near future.