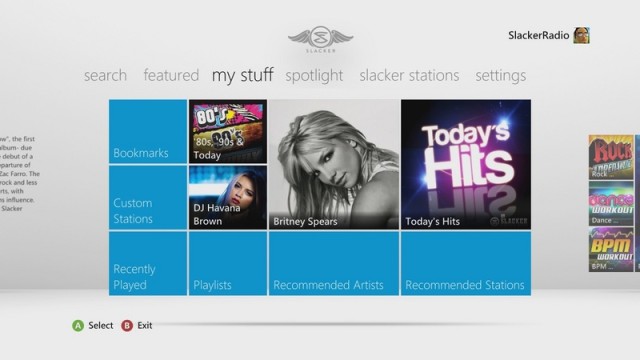 Xbox 360 owners already have quite a few music streaming services to choose from, including iHeartRadio, Last.fm and Microsoft's own Xbox Music. Today there's yet another new streaming music company that is now available for owners of Microsoft's current game console, and it's offering something that is of direct interest to gamers.

Slacker announced today that its service is now available on the Xbox 360 to U.S. and Canadian Xbox Live Gold users. The press release states that the app offers users access to not only millions of music tracks but also hundreds of "stations" that offer programming that's been edited and created by experts in their fields, including video game music.

The app's stations on Xbox Live will feature hand-picked selections of music tracks from games such as Microsoft's own Halo series, along with other franchises such as Gears of War and Final Fantasy.

Slacker's Xbox 360 app also contains a music guide that includes interviews with artists, music news and more. The company adds, "Listeners can also customize the experience with news and sports from ABC and ESPN or use new fine-tuning controls to personalize Slacker's music stations, with newer, older or more popular songs."