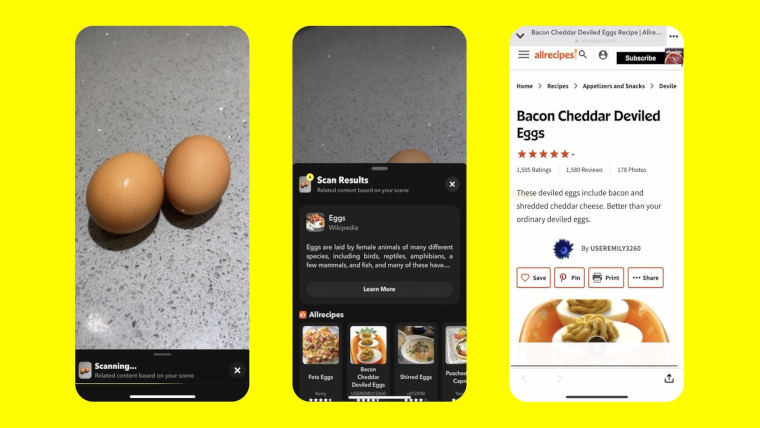 Snap, the firm behind Snapchat, has announced that users of its social media platform will now be able to pull up recipes for the food they have in the house right now. A new tool called Food Scan has arrived on the Scan tool and uses computer vision to see what items you have in order to suggest recipes.

The Scan tool already has the ability to show you information about clothing, pets, plants, and wine labels, but now, for users in the United States at least, it can connect to Allrecipes and Wikipedia to suggest what you can do with the food you show it. The data from Allrecipes includes a huge library of 4,500 recipes based on 1,200 ingredients and the data from Wikipedia will help you learn more about the object that you’ve scanned.

According to Snap, more than 170 million Snapchatters use the innovate Scan tool each month and it has said that it can’t wait to see what people make with the new feature that it has added today. To get started, open up Snapchat Camera and point it at an ingredient you have at home and tap the Scan button.

It’s important to note that the feature is only available in the United States, at least initially. Unfortunately for Snapchat’s internationally-based chefs, no release date for the feature has been provided.