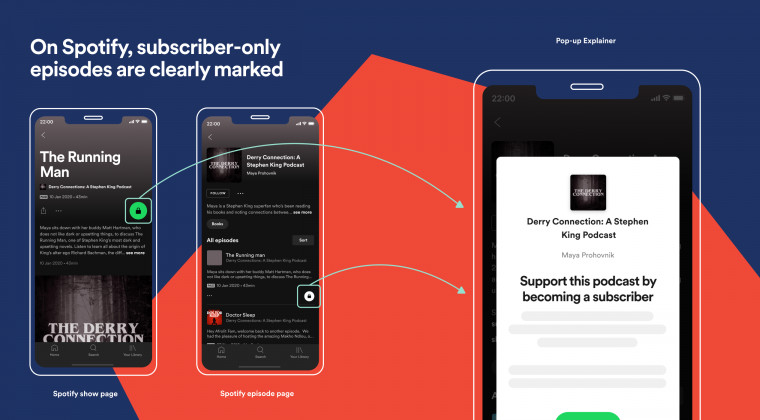 Spotify is taking on Apple in the podcasting race after the tech giant unveiled its Podcasts subscription service last week. The streaming service announced today that it is giving content creators a platform to monetize their podcasts through a subscription program.

Podcasters will have access to Spotify’s Anchor tool to choose episodes that they want to make available only to their subscribers and then publish them to Spotify or other platforms. For now, the service is available only in the U.S., with plans to bring it to more territories in the next few months.

Unlike Apple, though, Spotify isn't taking a cut from the creators' revenues, at least for the next two years. They will, nevertheless, carry the cost of transaction fees. However, the company will charge podcasters a 5% fee for access to the monetization option beginning in 2023.

The company will initially allow 12 creators to host their paid shows on Anchor, with exclusive bonus content available in their podcast feeds as well. The service is also starting to publish submissions from creators on the waitlist with the goal of expanding the program over the coming months. These episodes will be searchable on the platform with a lock icon on the play button to indicate that these are paid content.

Additionally, NPR will launch ad-free versions of some of its popular shows including How I Built This with Guy Raz, Short Wave, It’s Been a Minute with Sam Sanders, Code Switch, and Planet Money. These shows will be available to paid subscribers from May 4.

For creators with subscribers outside of Spotify, the service is testing a way to let them listen to their content on the platform using their existing login system. The company also said that certain episodes from Anchor creators will be eligible to receive ads through Megaphone starting on May 1. Spotify acquired the ad marketplace provider last year.