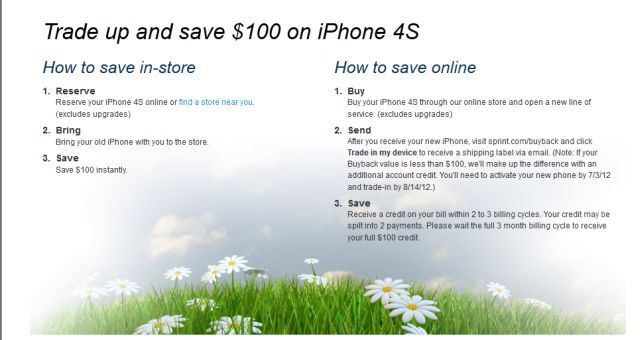 Earlier this week, Verizon Wireless confirmed that current customers who still are under the unlimited data plan for $30 a month will soon be forced to change to the company's upcoming shared data plans. That will mean Sprint will be the only one of the four major US wireless carriers with a truly unlimited data plan for all of its customers, with no throttling or data overage charges.

Now Sprint is taking advantage of the situation by offering people who own an iPhone from a competitor to switch to Sprint, with its unlimited plan, and get some money off in the process. Sprint has posted word on its website that from now until July 1st, people who trade in an iPhone from Verizon, AT&T or any other wireless carrier that offers Apple's smartphone will get a $100 discount when they buy a new iPhone 4S.

You can get that $100 off instantly when you come by a Sprint store and trade in your old iPhone. You can also get a credit if you purchase your iPhone 4S online; you will then receive the $100 savings as a credit for a future Sprint bill. This offer does not include upgrades; it's strictly for a new two year contract and a new line.

It's unknown if Sprint was going to launch this promotion before Verizon's bombshell announcement this week. Regardless, if you want to keep having unlimited data, getting a $100 credit towards a new iPhone 4S will certainly take some of the sting out of breaking a Verizon or AT&T contract agreement.