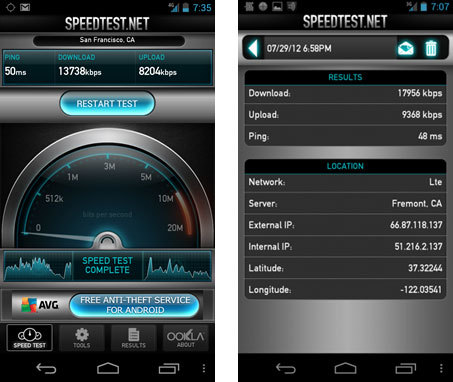 Sprint's 4G network rollout has been gradual, with the network slowly wheeling out the new connection across the United States, expanding from original launch areas. It looks like their rollout might not be nearly as slow as expected, for LTE is reportedly available in some areas of California before the rollout was meant to reach the area.

A tipster informed Android Police that he was able to get 4G-LTE connectivity around Palo Alto and Mountain View. Others have confirmed 4G connectivity in this area, as well as in both Sunnyvale and Cupertino.

You may notice a theme emerging here. Palo Alto is the home of Facebook, and Cupertino is home to Apple. Mountain View is home to many different companies, including Google. Along with Sunnyvale, you have the area generally referred to as 'Silicon Valley'. This makes up part of San Francisco's Bay Area, and with all the companies that could gain from 4G-LTE speeds, this might explain how it reached 'Frisco before official launch.

Either that, or they're testing something. These could be test sites, and they could disappear at any time, since it's before the official release. All the same, if you have a 4G-compatible device and are in the area, you might as well take a crack at it. Worst case scenario is that you get 4G for a limited period of time.

LTE's speeds are pretty impressive. Android Police's tipster was getting speeds of 13+ Mbps download, and 8Mbps upload, on a Samsung Galaxy Nexus handset. That isn't something to be sniffed at, especially on a mobile device.