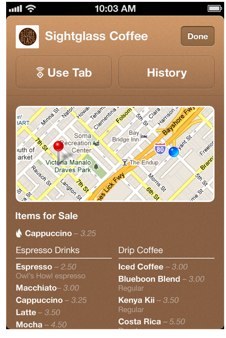 Could cash registers and even credit card swiping soon be a thing of the past when you go get a cup of coffee? That's what a company called Square wants to see happen. TechCrunch has revealed that the company has announced Square Register, which is an extension of an smartphone app that Square has already released. That app for iPhone, iPad and Android devices lets people take credit card info via both the app and a hardware device that attaches to the phone and swipes the credit card physically. There have been 500,000 of these app-hardware combos sold and Square said that it's processing $3 million in credit card transactions per day with this set up.

But now Square is taking that one step further with two new apps. One is Square Register for the iPad. This is a business app that allows not just for a business to accept credit card purchases but also has a number of other features. The more interesting app is Square Card Case for the consumer (iPhone only but coming to the Android later). This app will allow consumers to set up a tab at local businesses (a restaurant, a grocery story, and more). The app will allow consumers to pay for an item at that store via the app without having to take out a credit card. Square will receive a 2.75 percent transaction fee for all purchases via this new system.

TechCrunch reports that this new system is currently being tested by 50 merchants in a number of US cities and will be rolled out to more merchants "in the coming weeks". It should be interesting to see how credit card companies like Visa or MasterCard react to this kind of technology.