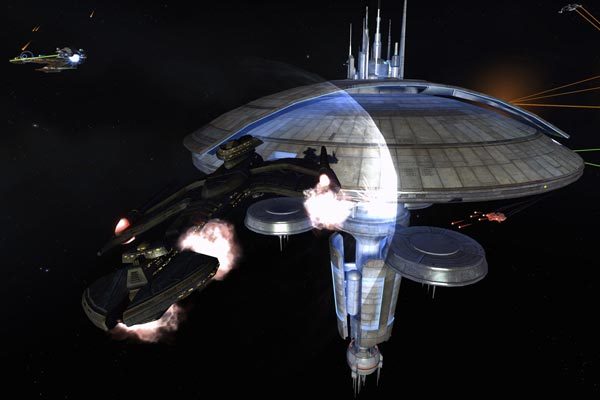 For the first time ever, Fleets will begin construction of Fleet Holdings, starting with a Starbase,  a safe port in the vastness of space,  one of the most requested features by Star Trek Online players. Now that is done, players can form Guilds and start to undertake construction projects through the Fleet Advancement system, which has projects for Fleets of all sizes.

The developers have already promised that besides the normal construction projects there will some special ones, through which players can unlock new features to give their Starbase more crew, more customization, and more recognizable features from Star Trek!

The first special project is Room with a View. Using material available in the 25th century, like transparent aluminium, makes it possible to build a structure that can withstand the pressures of space (and even combat) while providing a scintillating view of the universe.  In the developers blog Jesse Heinig, Game Designer of Star Trek Online, says that "upon completion of this special project, your Starbase’s interior blast shutters will be lowered. From the main floor, you’ll be able to look out into the stars in all of their glory. This special project will be available to start until around 10AM PDT on July, 26 2012."

Besides the new Starbase options, the Season 6 content update introduces new fleet events, with battles and missions for groups from 5 to 20 vessels, new missions and events designed specifically for max-level players. And there's even space to get an old enemy back online: the Tholians reemerge and take interest in a system in the Neutral Zone.

The Foundry, Star Trek Online's popular user-content creation tool, sees its first major update since launch, putting even more creative power into Foundry authors' hands. Improved UI allowing for easier item identification prior to map placement, additional items added to the content library and more functions that can be applied to content - including new combat behaviours are some of the new features.