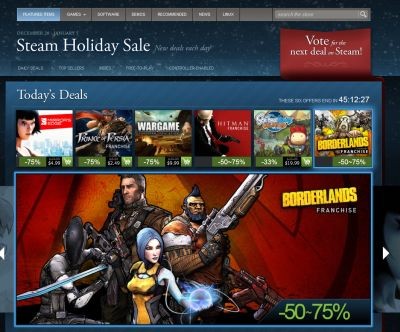 From now until January 5th, Valve says there will be new daily deals for PC games such as the Hitman and Borderlands franchise, which currently can be bought for 50 to 75 percent off their normal price. There are also "flash deals" that are only good for a few hours, such as Batman: Arkham City for 75 percent off for the next seven hours or so.

Steam also has several game bundles, collecting a number of titles from various publishers, on sale during the entire holiday period. Finally, you can also vote on which games should go on sale next on Steam. Valve has also set up a way for Steam customers to be emailed if a game on their online wish list goes on sale during the holidays.

In related news, Valve has now released the Linux beta client for Steam for anyone who wants to download it. There's also a new GitHub.com page for people to report bugs. Currently there are a combined number of 39 games and DLC packs that are available to play on Steam via Linux.