The launch of Apple's new iPhone 4 today has been overshadowed with issues surrounding signal loss when the device is held in the user's left hand. Engadget has spoken to Apple themselves about the iPhone 4's reception problems - Apple has essentially admitted it's a problem, but say it isn't related to how the phone was manufactured or the software - but rather how you're holding it.

They got this response from the Apple PR department:

Gripping any mobile phone will result in some attenuation of its antenna performance, with certain places being worse than others depending on the placement of the antennas. This is a fact of life for every wireless phone. If you ever experience this on your iPhone 4, avoid gripping it in the lower left corner in a way that covers both sides of the black strip in the metal band, or simply use one of many available cases.

A user even pinged Steve Jobs' email address and got an odd reply:

"Just avoid holding it that way"

Engadget says that the issue only happens on some iPhone 4's, as well as the 3G and 3GS, so it can't just be a hardware problem - and that it happens if "you cover the bottom-left corner of the phone and bridge the gap between the notch there with your naked flesh, you could see some signal degradation."

The iPhone 4 launch has been plagued with problems, with AT&T's servers crashing and leaking private information, pre-orders being cancelled and other hardware problems since it became available only two days ago. 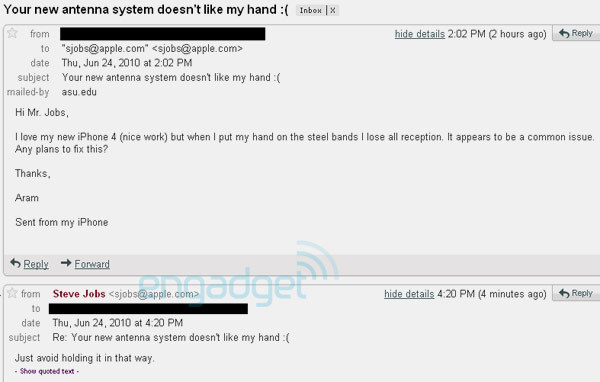