Another day, another email from Steve Jobs—this time concerning the lack of the Blu-Ray support from Apple. A 9to5Mac reader questioned Jobs over the lack of Blu-Ray to share his HD home movies and while he received an answer, it wasn’t exactly what he was hoping for: 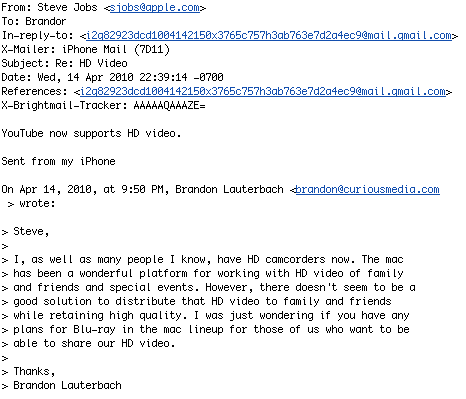 This is not Steve’s first comment on the lack of Blu-Ray; at a 2008 notebook event he proclaimed Blu-Ray as a 'bag of hurt’: "Blu-ray is just a bag of hurt. It's great to watch the movies, but the licensing of the tech is so complex, we're waiting till things settle down and Blu-ray takes off in the marketplace.”

Steve has also commented on last week’s Pulitzer Prize winning cartoonist rejection: “This was a mistake that’s being fixed.”