There are now well over 100,000 apps available for Windows Phone, and over 100,00 apps can be downloaded from the Windows Store to use on the Modern UI of Windows 8. Even with the amount of apps in each store, most people feel that it is not the quantity of the apps that is important but the quality.

The fact of the matter is that many popular apps currently available on iOS and Android have not yet made their official debut on Windows Phone and Windows 8. In a recent study from Infragistics, the research firm picked what it considered to be the top 100 iOS apps (not including games) and compared their availability to the same apps for Android, Windows Phone and Windows 8. 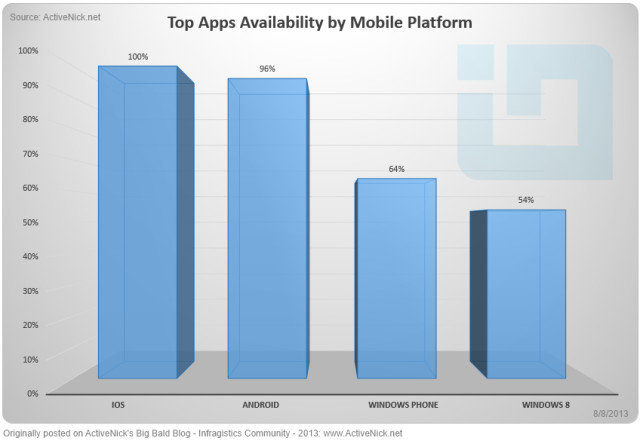 The final results show that while Android has 96 percent of the top 100 iOS apps, Windows Phone users can download and use just 64 percent of the same apps and Windows 8 can only come up with 54 percent. The study only shows official ports of the iOS apps to the other three platforms and does not include third party apps or knockoffs.

Among the iOS apps that both Windows Phone and Windows 8 currently lack are BBC News, Flipboard, HBO Go, Pinerest, Vine and of course Instagram, which Nokia has been trying to bring to Windows Phone for some time.

Of course, the list of the top 100 iOS apps is somewhat subjective but as the author of the study says, it can serve as a level benchmark to compare all four app platforms. The same study also points out that in terms of smartphone market share, Windows Phone is still well behind that of iOS and Android, so having 64 percent of the top 100 iOS apps on the Windows Phone platform is quite good.

In fact, in the few days since this study was first released, it has been revised to show that two missing Windows Phone apps, Wells Fargo and the official Major League Baseball (MLB.com At Bat) app, have since been launched for those users. Other official apps made for iOS and Android are already in the works for Windows Phone, such as Path, Flipboard and Vine. Windows 8 is also scheduled to get its own official Flipboard and Facebook apps in the near future.