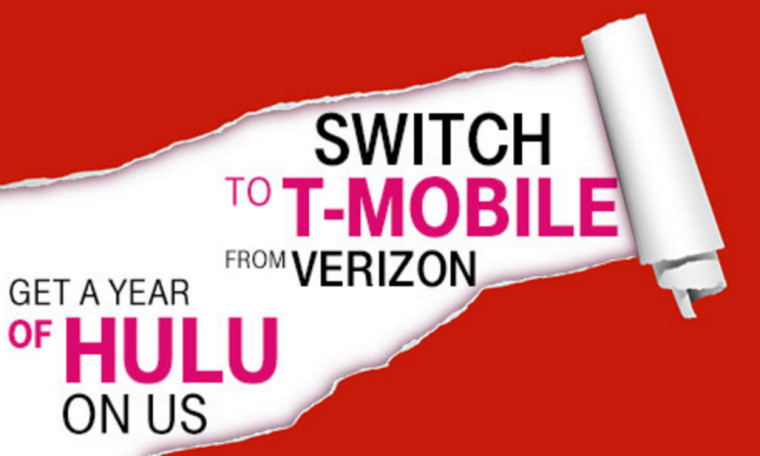 T-Mobile is back with another holiday offer, this time targeting Verizon customers in the United States who might be thinking about switching over to the self-proclaimed 'Un-carrier' with benefits.

The company recently announced $200 off 128GB iPhones to entice AT&T customers to switch, as well as three months of unlimited LTE data and a $200 credit for those switching from Sprint, as part of its Un-carrier Unwrapped campaign. Now it is taking on Verizon, offering those customers a free year of Hulu.

Starting today until December 17, any current Verizon customer who switches to a T-Mobile Simple Choice postpaid plan will receive a text message with a $100 gift code for Hulu.

Hulu is part of T-Mobile's new "Binge on" zero rating effort, which allows users to stream video services at 480p without it counting against their data plan. The $100 offer won't cover the $12 ad-free Hulu option, but it will get you the base $8 tier.

"Verizon customers put up with a lot of sneaky tricks from Big Red these days. Overpriced data, shocking overage penalties and no early upgrade option – just to name a few,"

"So while Verizon spends billions of dollars on TV ads screaming that ‘better matters,’ we are going to show their customers why the Un-carrier is better with a real gift, half-off the best accessories and a full year of Hulu that comes with unlimited LTE streaming with Binge On at T-Mobile."

T-Mobile says it will also cover Verizon customers "up to $650 per line or more [for] Verizon’s early termination fees", or the balance owed on the Verizon phone when switching over your number to T-Mobile with a trade-in.