Valve released an update for Team Fortress 2 on June 19th, with no prior warning. The update was marked as non-essential, and nobody is quite sure what it means. However, there are already theories about its significance and what it means for the game. Amongst these theories are some parodies as well, such as the claim Valve are using it to announce Half-Life 2: Episode 3. While there is a chance that this is the case, the release date for the third highly-anticipated episode of Half-Life 2 is affectionately said to be running on 'Valve time'; they can release it when they want and they probably will.

However, the update could be a sign of something else. The game could be receiving its 300th update in the next few days. Most people are siding with the belief that the game will receive its 300th update on Friday, June 22nd. The new update seems to indicate that there will be a future update to add something more to the game. What could be it be? We have no idea, but there is the rumor that Valve are adding a mode known as 'Mann vs Machine' to the game, and that it is coming alongside the 'Meet the Pyro' video people have been waiting for since the game's release.

The patch adds new items to the game, but the items are completely unusable. They seem almost to be clues for something else, and are guaranteed to drop alongside other weapons. They do not drop on their own but if you find a weapon during gameplay, then you will also receive one of the items alongside it. Having discovered it for myself, this does not mean you will receive one of these new items alongside a Mann Co. Crate drop, for I received a #45 crate without one of the new items. The new items are the Goldfish, Pocket Lint, Cheese Wheel, Banana Peel, Barn Door Plank, Secret Diary, and Damaged Capacitor. None of these items seem to have any relevance on their own, but together they have different clues in their descriptions. Below are each of the descriptions:

Goldfish: Does it strike you as mysterious that goldfish are neither MADE OF GOLD or EVEN FISH? Because it should. Also, goldfish ARE fish, we got that part wrong. TO GET YOU OFF THE SCENT!

Pocket Lint: Is it fabric lint? Navel lint you're keeping in your pocket so you don't lose it? Naval lint brushed from the hull of a battleship? This is pretty mysterious lint.

Cheese wheel: This cheese doesn't seem so mysterious until you realize it's full of bullet holes. Somebody got to this cheese before it could talk.

Banana Peel: Where did the banana go? Sit down for this next part, because WE HAVE NO IDEA. Admit it, that's kind of mysterious.

Barn Door Plank: This barn door plank doesn't look mysterious at all, until you view it at an atomic level. Hey, there's a horse there next to all those atoms. They're taking turns riding the horse. Man, how did a horse get there? Pretty darn mysterious.

Secret Diary: Unlike other games we could mention, owning this won't trigger a sound file narrating secret diary entries. Why? Because we RESPECT THE PRIVACY of our characters. What are they hiding? Truly we live in MYSTERIOUS TIMES.

Damaged Capacitor: How did it get damaged? Who damaged it? What is a capacitor? Better get your tickets ready, because the mystery train is leaving the station. Or did it already leave? Another mystery! 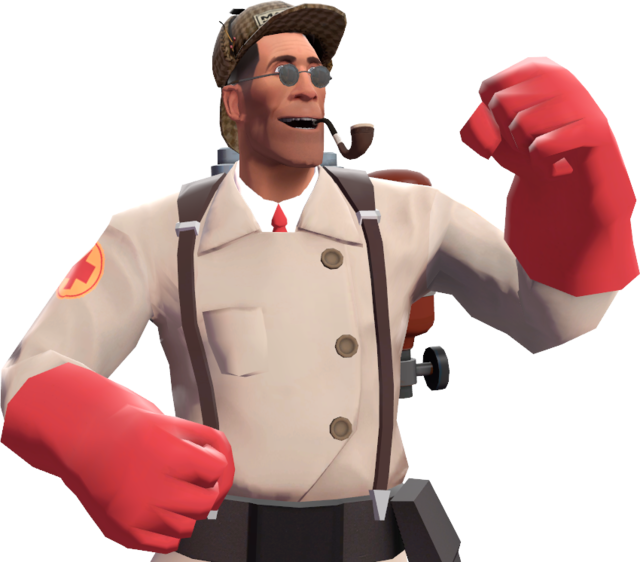 The Medic, wearing the 'Eliminating the Impossible' item set

The game was also updated on the 20th, bringing the game to a total of 299 updates. In this update, the descriptions for the items changed when the player was wearing a specific item set. The item set needed was 'Eliminating the Impossible'; a set specifically added for the Medic, giving him a comedic appearance resembling Sir Arthur Conan Doyle's character Sherlock Holmes.

If you have both items required for the 'Eliminating the Impossible' set, the descriptions will change. Characters will be missing from the description, but players have already worked out what the quote is. It reads:

"Think of the deeds of hellish cruelty, the hidden wickedness which may go on, year in, year out, in such places, and none the wiser."

This is a quote from the short story The Adventure of the Copper Beeches, which was part of the collection The Adventures of Sherlock Holmes. The fixation on Sherlock Holmes is odd, though obviously highly beneficial to players. Due to the date of publication they are freely available on Project Gutenberg.

The items are difficult to place since they do not seem to have any relevance when viewed individually. Viewed together their difference is seemingly insignificant as well. The real kicker is the name of the Medic's item set, 'Eliminating the Impossible', which is a reference to another Sherlock Holmes quote: "When you have eliminated the impossible, whatever remains, however improbable, must be the truth".

It could also be questioned just how long Valve has been preparing for this moment. The effect of the 'Eliminating the Impossible' set has been given as "Reduces mystery solving time by up to 88%", and these items have been available since March 8th, 2012. The only thing that is obvious is the 88% could be a joke reference to Back to the Future, since the DeLorean DMC-12 used in the film had to reach 88mph before it could begin time travelling. Perhaps the most famous article on the DMC-12 was the 'flux capacitor', which the Damaged Capacitor could be some kind of reference to.

The story behind the 'Mann vs Machine' update is difficult to source. Supposedly the mode would be a kind of Horde mode, tasking players with fighting off waves of robots. In some ways it would fit with the game's 'retro-futuristic' style. Some of the items in the game are obviously inspired by 1950s futurism, and the belief in the importance of robots for dealing with every facet of normal life could be a continuation of that. 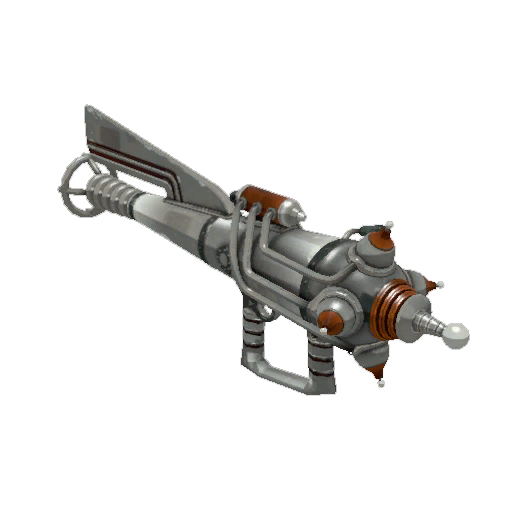 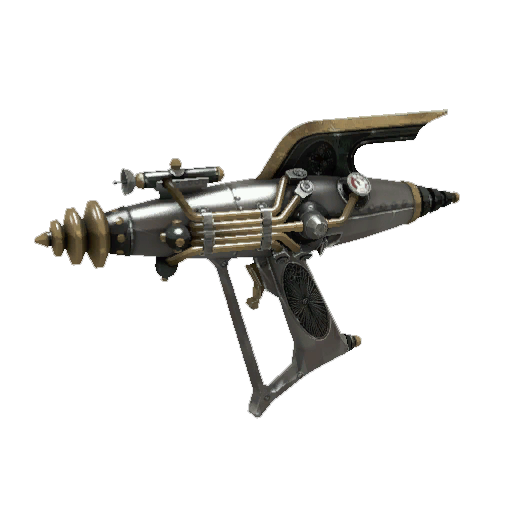 Since May 5th, according to a user on the official Steam forums, Valve have slipped a reference in that the game will be receiving the update, abbreviated to 'MvM' during that week. It is amusing, but has meant people have been believing such an update will release soon for more than a month and a half. Still, Valve's sense of humor means this is probably not out of their scope for amusement.

The 'Meet the Pyro' video has been highly anticipated since the release of the eighth 'Meet the' video for the game, the Medic. There are nine classes in the game and Valve have released a new 'Meet the' video for each of them periodically. The Pyro is the only class yet to receive one of these videos, and people have been speculating about this for a considerable period of time. There have been a number of different fan-made videos masquerading as the official Valve-produced video, though none of them obviously are. Why the Pyro has been skipped over is unknown, though the videos are not released in the order of the classes in-game. This is proven by the fact the first video was 'Meet the Heavy', instead of 'Meet the Scout'. Feel free to watch the most recent official 'Meet the' video below.