Five years ago the One Laptop per Child foundation was formed with the goal to "create educational opportunities for the world's poorest children by providing each child with a rugged, low-cost, low-power, connected laptop." The initiative began mass production of the laptops in November 2007, with partnerships with governments to distribute the laptops amongst communities. Over the last two years, 362,000 pupils and 18,000 teachers were part of the project and received access to the laptops.

The laptops offer the ability for teachers to share content with students with a local mesh wireless network, but the largest issue is that the laptops couldn't receive new educational content due to the laptops being primarily deployed in "impoverished schools and communities in areas of the world where there are no phone lines, let alone Internet services" according to a press release from Microsoft.

This is where "OneBeep," a team which entered in the "Imagine Cup" come in. The Imagine Cup is a competition run by Microsoft which encourages young people across the planet to come together and solve the world's problems and to bring out the best idea each year based on a set challenge. This years theme was "Imagine a world where technology helps solve the world's toughest problems."

Team OneBeep is made up of Vinny Jeet, Steve Ward, Kayo Lakadia and Chanyeol Yoo, with James Valentine from Fronde as the business mentor, and Dr. Nirmal Nair from Auckland University as the academic mentor. OneBeep came up with an innovative solution to the challenges presented in third worlds, and developed software that would "package a file of educational data as audio, to be sent over Analogue radio waves" to allow the OLPC students and teachers to receive new and updated content easier than ever before.

The radio transmissions can be received on almost any AM/FM radio which has a headphone jack, and the file is then converted back into the original file for use, which allows the laptops content to be updated with content easily and over long distances. The only new hardware needed to make the innovation work being a simple audio cable. Currently the team says they can transmit data at 1kbps, which seems slow, but in reality is much better than nothing at all. This allows a word document to be transmitted in around 10 minutes to over 5000 students in Rwanda.

The team was placed third in the Imagine Cup 2010, which is a great honor for the team and is currently working with the OLPC foundation to continue the project and plan to open-source the software in the future. 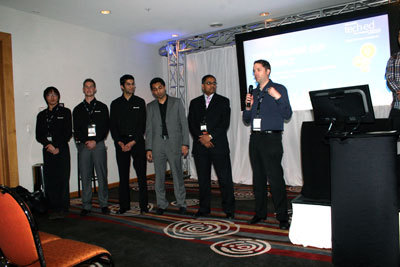