Although Asrock's Z87 Extreme9/ac offers all the motherboard we need at $360, we're happy to see companies catering to enthusiasts who will take things further -- like $200 further. LGA2011 is known for such solutions, including Asus' $500 P9X79-E WAS or Asrock's own $600 X79 Extreme11. With that platform now a few years old, manufacturers are shifting their focus to LGA1150, which arrived this year alongside Haswell and is accompanied by the Z87 chipset, among other Lynx Point-based parts.

Some of you may question Asrock's platform choice anyway because Intel's most powerful desktop CPU (the Core i7-4960X) started shipping a few months ago on LGA2011. While there's no denying that hexa-core, dozen-threaded processor is an enthusiast's dream, at $1,000 that's precisely where it will remain for most. The chip is grossly overpriced and its aging platform doesn't exactly sweeten the deal. For a third of the cost, most folks are better off with the newer Core i7-4770K and LGA1150.

So, how exactly does a company justify $540 for a motherboard? 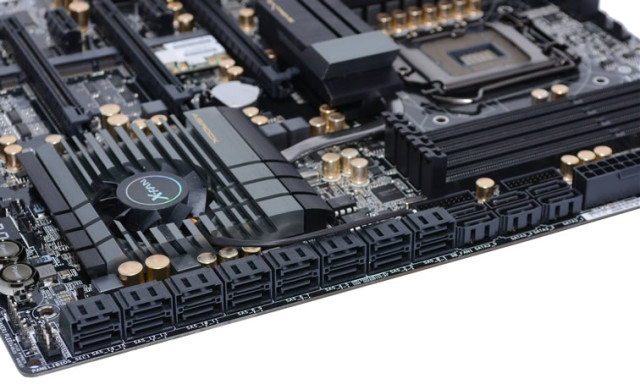 The board's PCI Express configuration seems like as good of a place as any to start and it features an ExpressLane PEX 8747 chip, which is a 48-lane, five-port, PCIe Gen 3 switch. The board has four PCIe x16 slots, though one bypasses the PEX 8747 and lets single-card setups connect directly to the CPU. Meanwhile, 3 and 4-way GPU configurations all receive x8 bandwidth. In addition to the Z87's six SATA 6Gb/s ports, Asrock has included an additional LSI SAS-3 3008 controller for another eight 12Gb/s ports which are then split and turned into 16 6Gb/s ports using a 3X24R expander.