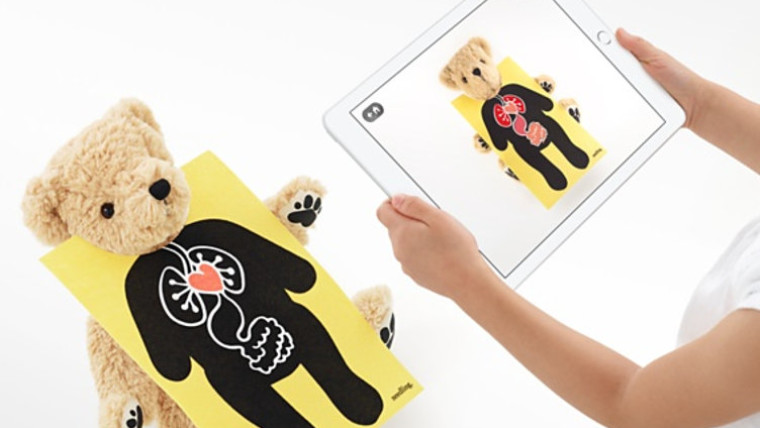 Parker the Bear is a new teddy bear from a company called Seedling. It can be paired up with an iOS device, allowing it to simulate various functions using augmented reality (AR).

The bear itself has no batteries, no connectivity, and no cameras, so the AR is essentially run from the iOS device through the app. The bear does come with things like a miniature stethoscope and feeding spoon, the idea being that children will be able to scan Parker and examine its bones and body for ailments, for which they will be able to do various things to help with, like check its temperature, give it medicine, or feed it. The objective is for the child to be Parker's doctor and caretaker, while also learning by completing problems presented by the app.

The teddy bear has a 'Happiness Factor' which goes up when the bear is cured but also when the child does things like take pictures of the bear to hang up in the bear's AR world. The progress made through these actions and the raising of the Happiness Factor will result in new objects and activities being unlocked for the child to enjoy with Parker.

Parker is designed to teach basic biology, digital literacy, and critical thinking through some of the in-app problems but it also aims to nurture creativity by, for example, making the child design a bandage or create AR scenery for Parker's pictures.

AR and VR systems are already being used quite extensively in design, as well as for mature games like Fallout 4, but here Seedling has managed to very neatly pair up a Victorian-era children's toy with one of the most recent technological innovations. The product is listed at $59.95 on the Apple Store; it will be interesting to see if Parker makes a significant impact on the age-old children's past time of playing doctor as well as on the life expectancy of teddy bears in general.