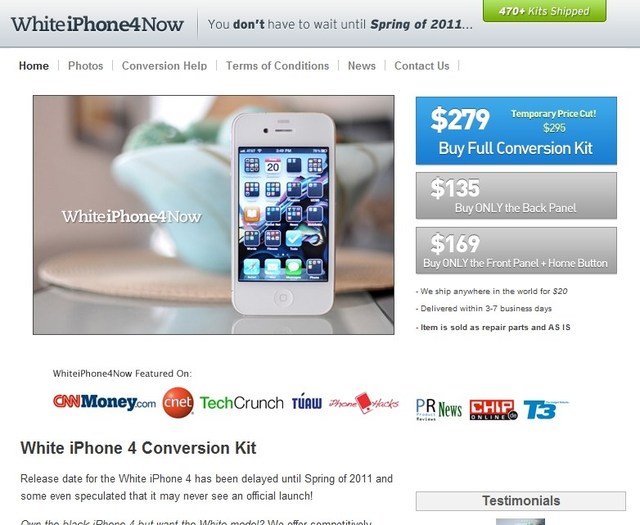 While the black iPhone 4 was released to US customers in June and the rest of the world in the months that followed, the phone's white model won't be in the hands of customers until Spring 2011 after a series of delays.

Not content to wait that long, high school senior Fei Lam cut out the middleman and went straight to Apple parts supplier Foxconn, according to The New York Observer. The result was whiteiphone4now.com, a conversion kit that claims to allow customers to convert a black iPhone 4 to a white model. The site launched in July and at the time, it was unclear if the kits were, as TechCrunch observed, ''simply a bunch of parts from the black iPhone painted white''.

Now, Lam has spoken out for the first time to confirm the authenticity of his products.

"I knew a guy from a few years back that had somewhat of a relationship with folks in Foxconn," he told The Observer by email. He claimed that after initially selling the parts at a loss, attention from tech websites had allowed him to make US$130,000 in profit since August.

Lam is currently selling the full conversion kit, which includes back and front panels, a retina display, supporting frame, front glass, digitizer, home button, back glass and LED diffuser and all necessary tools for US$279 plus shipping.

As many would expect, Lam has claimed his business venture has attracted unwanted attention from those unhappy with his actions.

''I got an email from a private investigator accusing me of selling stolen goods, which I'm 100 percent sure is not the case. They are some kind of anti-counterfeit/trademark firm, which sounds ridiculous, similar to what Apple is bringing up to remove White iPhone 4 Listings on eBay. I don't know how this legal stuff works,'' he said.

It remains to be seen if Apple will take legal action against the teen entrepreneur. Lam said he planned to contact a lawyer, but has no plans to stop selling the white iPhone parts.