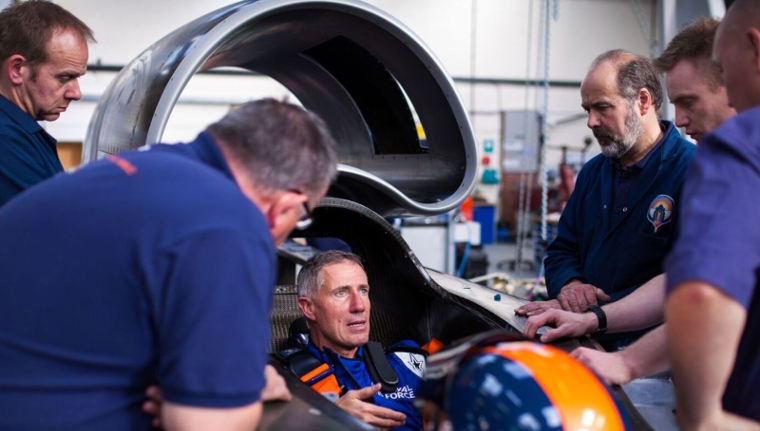 A Bristol-based team of aeronautical and automotive engineers is preparing to conduct a test run of their Bloodhoud SSC (Supersonic Car) at Newquay airport, England. This is in preparation for a later attempt where the team will try and break the world's land speed record.

During the two test runs, where the vehicle is expected to reach 200 mph, the team will be keeping a close watch on the vehicles aerodynamics and engine performance. If all goes well then the driver, Wing Commander Andy Green, will make the full attempt at a later date across a strip of desert in South Africa. Where they plan on going well beyond the sound barrier and reaching 1000 mph.

Many of the people on this team set the current land speed record of 763 mph back in 1997, in fact, Andy Green was the driver back then too. The Bloodhound SSC has the same engine that is used in the Typhoon Eurofighter combat jet, which will get the vehicle up to around 350 mph at which point a Jaguar V8 Muscle car engine is initiated to supply fuel to a rocket which will then throw the vehicle up to the 1000 mph goal.

For some perspective of how fast this is; the average cruising speed of a commercial passenger jet is around 575 mph, the much spoke of Hyperloop is projected to reach around 760 mph, and the Buggatti Veyron Super Sport can only reach 268 mph. If the Bloodhound team is successful then anyone who might want to take the title away from them in the future has a significantly higher bar to reach.