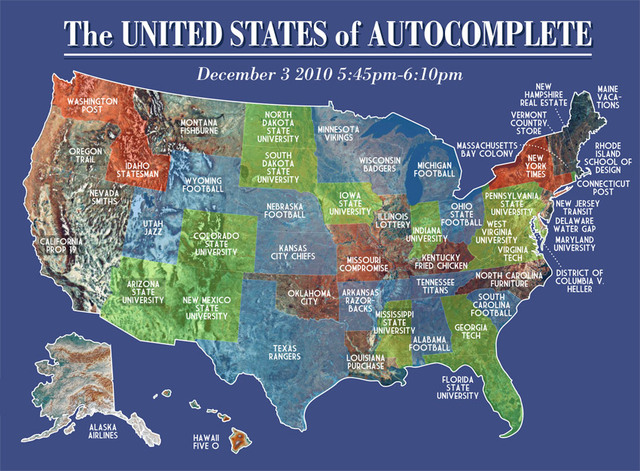 Here is something fun your weekend enjoyment. Spotted by Gizmodo, the folks at Very Small Array generated a map of the United States and substituted state names with their Google autocomplete results. The results give some insight into the trends and topics that Google's search algorithm associates with the different U.S. states. Some are fun, some are pitiful, and some are downright crazy.

Take for example, the poor islands of Hawaii, which are still associated with Hawaii Five-O. Yes, the popular 70's show has been re-cast and is now airing on CBS, but I am willing to bet Hawaiians would rather be known for their killer waves and not a fictional crime drama. Montana also has the unfortunate association with Montana Fisburne, an American pornographic star also known as Chippie D.

Some of the associations, like Massachusetts Bay Colony, Oregon Trail, and Louisiana Purchase, are historic. Others, like Kentucky Fired Fried Chicken, are a no-brainer; while Illinois Lottery leaves us wondering. Mostly, though, we see that we are obsessed with sports and universities and I am willing to bet those two terms are intertwined with folks looking for sports by typing in the university's name.

The results were generated on December 3rd, 2010 between 5:45 and 6:10PM, so your mileage may vary if you try to duplicate this map right now. Too bad the folks did not query Bing at the same time as it would have been interesting to see the differences, if any, between the two search engines. Anyone with some spare time want to give it a whirl and see what you come up with?