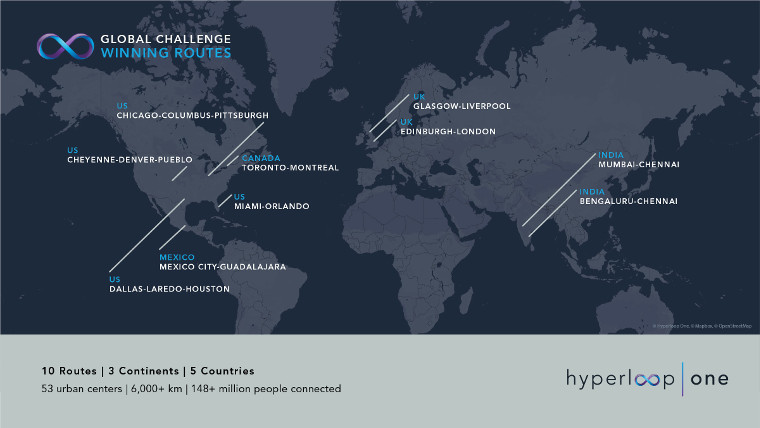 Hyperloop One, the Nevada-based company working on the revolutionary new transport system, has just announced the top ten winners of its Hyperloop One Global Challenge.

The Hyperloop One Global Challenge is a competition setup by the company which allowed teams from all over the world; be they from universities, countries, or cities, the opportunity to come up with a proposed route for the Hyperloop transport system. The submitted routes were then analyzed by experts in infrastructure, technology, and transportation. Following that investigation, 10 different routes from 5 countries were selected; the winning countries were the US, UK, Canada, Mexico, and India.

In the US there were four winning routes, these were: Cheyenne-Denver-Pueblo, Chicago-Columbus-Pittsburgh, Miami to Orlando, and Dallas to Houston.

For the UK, there were two successful routes: Edinburgh to London, and Glasgow to Liverpool. India also has two promising routes between Bengaluru and Chennai, as well as Mumbai to Chennai. Canada and Mexico both got one route each: Mexico City to Guadalajara, and Toronto to Montreal.

Hyperloop One will now be working closely with these teams on their routes, exploring the feasibility and challenges of each route, which might eventually lead to the actual development of some of these routes around the world. Initially, there were teams from over 100 countries and there are still 11 other finalists that the company's experts will also be working with as development of Hyperloop continues.

Of particular note, is that Hyperloop One has entered into a public-private partnership with the Colorado Department of Transportation and together they will begin a thorough feasibility study of a potential route and all that it might be able to provide in terms of transport and freight. So it may very well be the case that in the near future with the legislation, terrain, and Hyperloop in Colorado, people will be able to be both fast and high.