Last week, Google announced the newest addition to its family of own-brand devices, the Nexus 5. The new handset is also the launch device for the latest version of the Android OS, version 4.4 ‘KitKat’, which will be made available to some – but certainly not all – Android handsets in the coming weeks and months.

Many Android owners have come to accept – albeit through gritted teeth – that they cannot expect to receive every OS update that is released. But many fans of the platform turned to the Nexus range with the expectation that Google would provide updates to its own devices more frequently, and for longer, than those offered by other manufacturers.

Owners of the Galaxy Nexus were therefore rather disappointed to learn that the device will not be eligible for the Android 4.4 update. The news came as quite a surprise to some, given that the handset is just two years old, and was still being sold by Google until a year ago.

Google, along with some of its hardware partners, has committed to providing OS updates for its devices for 18 months from launch, and the Galaxy Nexus clearly falls outside of this timeframe. But many owners of the handset are not satisfied with this strict enforcement of the update policy, and thousands have signed a petition requesting that Google review its decision.

The petition reasons that the Galaxy Nexus is more than capable of running Android 4.4, particularly given the work that Google has done to optimise the updated OS for devices with far lower hardware requirements. It ends with an impassioned plea: 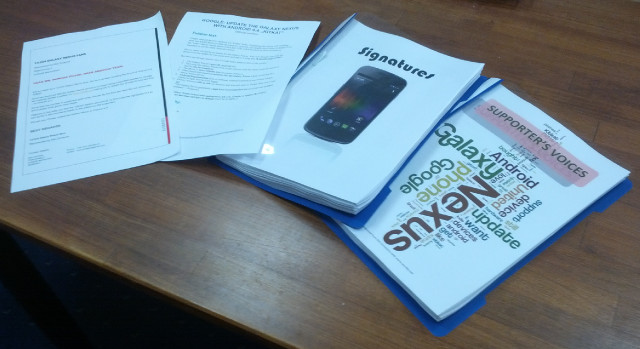 At time of writing, over 18,000 signatures have been added to the petition. While it still remains open, its organiser, Max Duckwitz, has already printed off the first 17,500 signatures and comments to be delivered to Sundar Pichai – Google’s senior vice-president for Android – in the hopes that the company will reverse its decision.