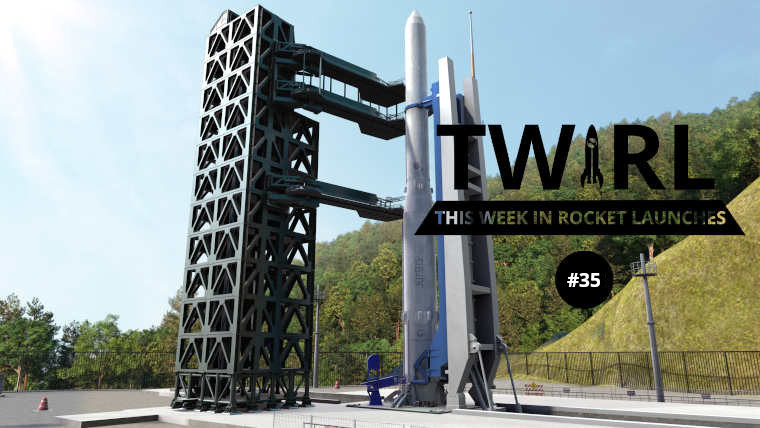 The first launch of the week comes from ExPace, a Chinese state-owned company, which is planning to launch a Kuaizhou KZ-1A rocket carrying the Jilin Gaofen 2F satellite. As with previous Jilin satellites, this one will also join the Jilin 1 Earth observation constellation. The satellite, similarly to others that have been launched, can capture images with full-colour resolution at better than 0.76 meters over 40km of land. The Jilin 1 constellation will continue to grow until it reaches 138 satellites.

In what’s probably the most interesting launch of the week, South Korea will be launching its Nuri rocket which is also known as KSLV-II. The Korea Aerospace Research Institute (KARI) will be launching the rocket from the Naro Space Center at 6:00 a.m. UTC in what will be the first test flight of the craft. This time, the rocket will be carrying a mock-up satellite to prepare for future missions.

The Nuri rocket has been designed to be more affordable with each launch estimated to cost $30 million which makes it cheaper than competitors in the region. Eventually, the rocket will be able to launch satellites for various countries with a focus on those in Southeast Asia. A future version of Nuri could also be used for a lunar lander mission by 2030.

The final launch of the week is an Ariane 5 ECA+ rocket carrying the SES 17 and Syracuse 4A communications satellites into orbit. The SES 17 satellite will provide internet to airline passengers travelling over the Americas, Caribbean and the Atlantic Ocean while the Syracuse 4A will provide communication services for the French military, both of these satellites were designed by Thales Alenia Space. The rocket is set to launch from Ariane Launch Complex 3 (ELA-3) at the Guiana Launch Centre in French Guiana at 1:01 a.m. UTC.

The first launch we go last week was Blue Origin’s New Shepard 18 mission which was carrying William Shatner, the actor who played James T. Kirk in Star Trek: The Original Series. While most of the crew were enjoying weightlessness, Shatner seemed more fixated on the unique view he was getting out of the window which he explained on camera to Jeff Bezos after stepping out the capsule.

The second launch came from Russia where a Starsem Soyuz 2.1b rocket carried 36 additional OneWeb satellites back into orbit where they will beam internet back to Earth.

The next launch was a Chinese Long March CZ-2D rocket carrying the CHASE satellite which is tasked with performing solar observations. The rocket also carried several other payloads.

On Friday, China launched the Shenzhou-13 on a Long March 2F to the Chinese Space Station (CSS). This mission was notable because the first woman to head to the CSS was aboard.

Later on, the Shenzhou-13 docked at the CSS and the crew transferred to the CSS.

Finally, a ULA Atlas V rocket carried NASA’s Lucy mission off into space earlier today where it will begin a multi-year voyage out to Jupiter where it will tour Jupiter’s Trojan asteroids.

The actress Yulia Peresild and film director Klim Shipenko are due to come back to Earth aboard Soyuz MS-18 on October 17. According to NASA, the thrusters on Soyuz MS-18 continued to fire after a planned test causing a loss of attitude control on the ISS. The ISS regained attitude control within 30 minutes and the crew were awake and were in no danger.