Cyber attacks are nothing new in today's digital world. However, the increase in suspected state-sponsored attacks against individuals has generated concern amongst the global tech community.

In October of this year, Facebook revealed its plans to notify users suspected of being victim to such attacks and guide them towards increasing the security of their accounts. Years earlier, in 2012, Google had implemented similar warnings in its Gmail service along with recommendations such as enabling two-factor authentication and increasing password entropy.

In the last couple of days, it seems that Twitter is now following suit given notifications received by users including Runa Sandvik and @coldhakca. These notifications have also included links to the Tor Project and the EFF's guide to "Protecting Yourself on Social Networks" in case those who tweet under a pseudonym are concerned about further targeted attacks. 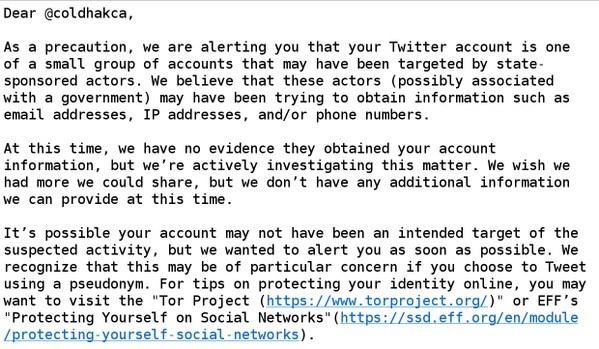 In these notifications, Twitter also advises affected users that it currently has no evidence to believe that any personal account information has been obtained by these supposed "state-sponsored actors". However, given the wording of the message, it doesn't rule out that other information could have been obtained or that additional information discovered through subsequent investigations would be shared with affected users.