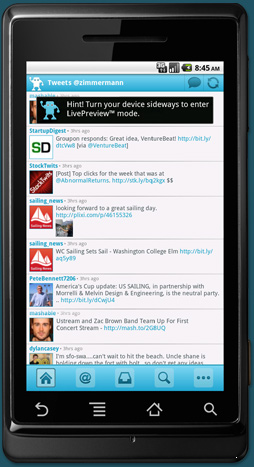 Twidroyd, UberTwitter and UberCurrent users were faced with not being able to use the apps today as Twitter decided to suspend them all on the grounds of violating the company’s API policies.

It appears Twitter have sent an email out to the users who use the apps, in which it explains that apps that don’t “abide by a simple set of rules that we believe are in the interests of our users, and the health and vitality of the Twitter platform as a whole” are suspended.

Twitter acknowledges that Twidroyd is a widely used app as they later say “We are taking the unusual step of sending out this letter because today’s suspension may affect a larger number of users.”

Although suspensions are very common, with more than one hundred suspensions each day, it is less common to see two widely used apps being shut down; arguably to move people to Twitter’s official apps.

Inevitably, Twitter had predicted that there would have been some confused people, and in just in case you don’t receive such email, have posted the same information on their support center.

Matt Graves, a company spokesman for Twitter has replied to an email by pcmag, in an effort to acquire a more detailed explanation. "Today we suspended several applications, including UberTwitter, Twidroyd and UberCurrent, which have violated Twitter policies and trademarks in a variety of ways. These violations include, but aren't limited to, a privacy issue with private Direct Messages longer than 140 characters, trademark infringement, and changing the content of users' Tweets in order to make money.”