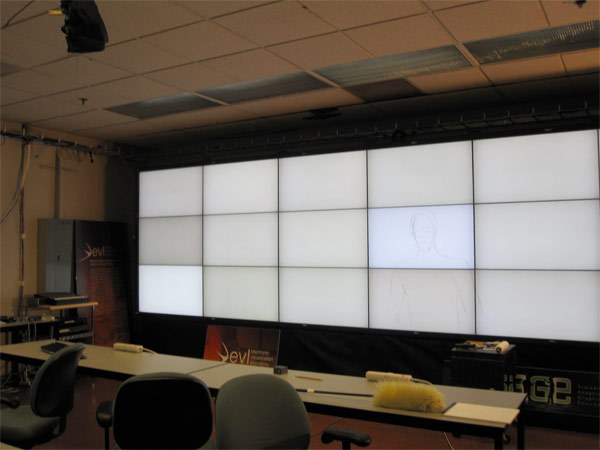 Think your triple-display setup is pretty good? How about 18 displays, all touch-enabled?

Engadget reports that students at the University of Illinois Electronic Visualization Laboratory (EVL) in Chicago have created just that, resulting in a 20-foot electronic canvas able to react to 32 touches simultaneously.

According to the university's website, the EVL aims to build a partnership between artists and computer scientists. It was that partnership that resulted in the touch-enabled wall, with touch capabilities not included in the original project concept. A group of five students spent their summer making the wall touch-enabled, with one creating an iPad application that allows people to ''paint'' on the virtual wall.

Graduate computer science student Arthur Nishimoto explained the process of making the wall touch-enabled to a reporter at the university's Medill School of Journalism.

Having already worked on EVL project TacTile, a touch-enabled table composed of one HD screen, Mr. Nishimoto said he was well-placed to serve as an advisor on the touch-wall project.

He said the wall uses infrared light that is emitted and detected to recognize touches. When a finger - or any other object - crosses the infrared light rays, the wall detects a touch. Mr Nishimoto has reportedly also created games that can be played across all 18 displays. Touch overlays for the project were supplied by Silicon Valley-based PQ Labs.

Fine arts masters student JD Pirtle is leading the creative side of the project, and created the iPad application that allows users to realise the wall's potential as a giant canvas. At the moment, only one iPad can be connected via WiFi at a time, though Mr Pirtle said he hoped to make multiple connections possible in the future.