If you have Windows 8 or the preview version of Windows 8.1 installed on your PC and have noticed that the text is sometimes slightly blurry, you may not need a new pair of glasses. There have been a number of reports on Microsoft's support forums during the past several months of users claiming they have experienced blurry text and fonts while using Microsoft's latest operating system.

In fact, the report on the forums have been appearing since the launch of Windows 8 in late October and even before, when the Consumer Preview was released. Many of those separate message board strings have been collected by one user in another Microsoft support forum thread which now had over 240 posts. In short, many Windows 8 owners have experienced fuzzy text while using Internet Explorer 10, Office 2013, the fonts on the Start screen and other third-party applications. 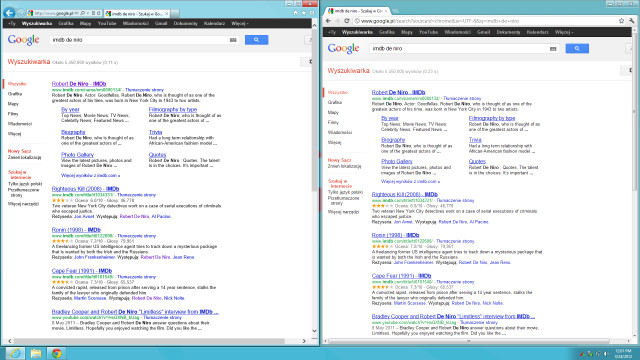 Comparison of IE10 and Chrome on Windows 8

Some Microsoft MVPs have responded to the complaints with proposals intended to solve these problems in some message board threads, but apparently these workarounds have not fixed the issue for many of the people experiencing the fuzzy font problem. Here's a recent post on the thread, dated June 19, from a user named Chasanne:

I almost returned my new computer to Dell. With a 24 in. monitor, the fuzzy font problem is very noticible. Dell tech support updated my video card driver no avail. Then their tech fellow came to my house and changed the video card, again to no avail. He did notice the problem and told me I should switch to an Apple computer. The Dell tech people said they are going to report the problem to Microsoft, but I'm not optimistic. The press has reported that the sales of Dell computers are down significantly because of Win 8. I suspect that the fuzzy font problem is being kept quiet so as not to hurt sales further. So Microsoft has managed to delived (sic) low-def graphics in a high def world. Management has become profoundly unreponsive (sic) and will continue to pay the price.

Another post, this time written on July 8th, has a user named lolw8 talking about his experience with the Windows 8.1 public preview:

I've had this problem since Windows 8 beta and I figured the 8.1 preview would finally fix this issue! I was wrong. Still looks awful, even with the nvidia 8.1 beta drivers, tweaking cleartype, etc - it all looks horrible. I can't believe this is still not fixed, it's literally awful, especially in IE 10/11.

Neowin has emailed Microsoft to find out if the company will address the blurry font issue; this post will be updated if a response is received.

Thanks to James Presland for the tip!