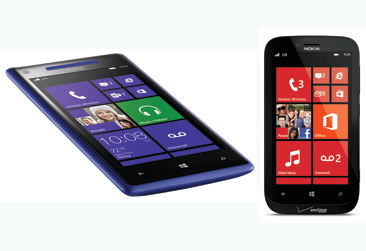 After sitting out of the Windows Phone 7.5 launches in 2011, Verizon Wireless will soon be back in the Windows Phone business. The company announced today it will begin to take pre-orders for two of its three planned Windows Phone 8 smartphones on Friday at 1 am Eastern time.

The press release states that Verizon will sell its version of HTC's Windows Phone 8X for $199.99 with a new two year contract on that date, and it will be officially launched by Thanksgiving. It will come in blue, red or black colors, and Verizon says the red and black versions will be an exclusive for the US wireless carrier.

Verizon will also have the US exclusive on the Nokia Lumia 822, which it will sell for $99 with a two year contract and a $50 rebate. The smartphone will come in black, white and grey colors and will also officially go on sale by Thanksgiving.

Finally, Verizon will also have a US exclusive on the Samsung ATIV Odyssey device. There's no word on pricing or pre-orders yet but Verizon says it will be available sometime before the end of 2012.

As we mentioned before, AT&T will have the Nokia Lumia 920 and 820, on sale in its stores starting tomorrow. The company also just announced today that its versions of the HTC Windows Phone 8X will go on sale Friday as well, and will be in AT&T stores next week.