Back in November, Nokia announced that its plans to divest its Vertu luxury handset division had finally been completed. The brand was sold to private equity firm EQT VI for an undisclosed sum, but it was confirmed that Nokia would retain a 10% stake in the company. Although images from June 2012 claimed to show a Vertu Windows Phone 8 handset, it was widely believed that the brand would not follow Nokia by adopting Microsoft's mobile OS and indeed the company later confirmed plans to adopt Android as the platform for its future devices.

The first such device has now broken cover in the form of images spotted by Japanese site Blog Of Mobile, and it looks like Vertu's trademark love-it-or-hate-it design style is alive and well. 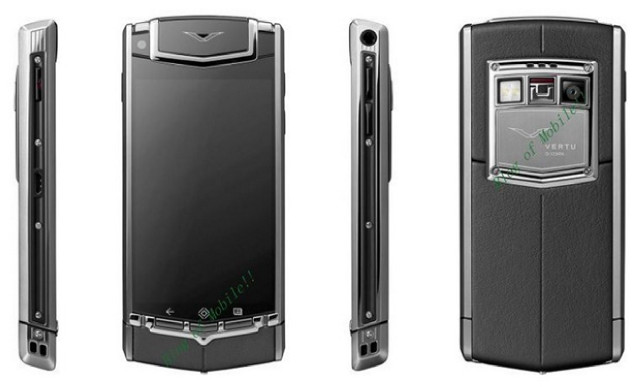 According to a description on Bluetooth SIG, uncovered by Engadget, the "Vertu Ti possesses the classic Vertu design DNA and characteristics - strong, unique & distinctive. The design and craftsmanship positions Vertu Ti alongside other iconic products in the luxury market." Alrighty then.

Of course, the appeal of Vertu - such as it is - lies not with superlative specs but with the luxury positioning of the brand, which often includes precious stones and metals as part of the handsets that they offer. Most Vertu handsets sell for a few thousand dollars, but some have reached truly extraordinary prices - a diamond-clad Vertu handset was once sold for a staggering $300,000 USD (£190,000 GBP / €221,000 EUR).

Exactly what price tag will be attached to the Ti when it launches isn't yet clear, but tweets from well-connected tech blogger Eldar Murtazin hint at prices as high as €8,000 ($10,800 / £6,900). Bargain.