Anonymous sure has been fairly busy recently with their recent attacks on PayPal, MasterCard, and now are preparing to take down Visa's website according to a tweet by @Anon_Operation under Operation Payback.

The group today announced the attack by tweeting;

Anon has already starting attempting to get around their hosting problems and Twitter blocking the popular tag #wikileaks and their information page regarding the attack has utilized the free site, PasteHTML to set up a quick and temporary page.

PayPal, MasterCard, and Visa all have followed through in not allowing donations to be made to the WikiLeaks organization. Whether this was due to commands issued by the United States Government or not isn't clear for at least MasterCard and Visa, but was confirmed in PayPal's case.

Interestingly enough, and perhaps a poor move by the Anon movement, one can quickly check to see who all this has been retweeted by, likely making them suspects of aiding DDoS attacks, which are illegal. The Anon Operation has switched their hashtags to #wikiealsk to get around the prevention of using #wikileaks in trending topics enforced by the social networking site, Twitter.

Users get involved in a DDoS by voluntarily allowing their computers to become remotely controlled so that many can work as one. Aiding in this type of activity is illegal, although it doesn't seem to be an enforced law right now.

At the time of the tweet, Visa had 30 minutes left until the attack begins, time will tell how their servers will hold and what repercussions will come from this latest in a series of Anonymous attacks.

Update #1: The group has started the attack; Visa.com appears to be down for all right now. That was fast.

Update #2: If you're in the US and wanting to use Visa.com, you can visit https://usa.visa.com/, which appears to use a different provider.

Update #3: The group stated on their IRC channel during the attack: 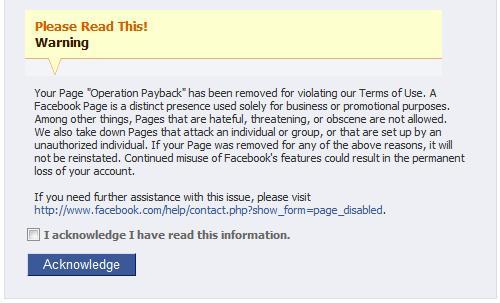 Update #5: It looks like Visa's commerce engine, verified.visa.com is also down, as of now. Anyone had issues making transactions? Let us know in the comments!

Update #7: Mastercard says that the "leaked" credit cards that were circulating online were fake.

Update #8: Twitter is under attack from Operation Payback right now. The site is currently stable. 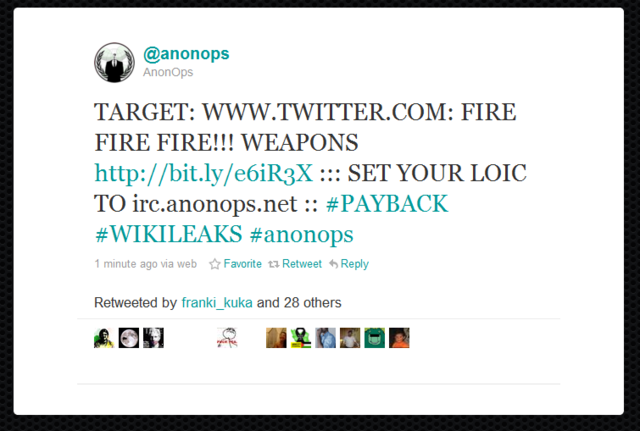 Update #10: Although @Anon_Operations has been "restored" they lost their followers. The current word is that they have switched to the @Op_Payback account. The attack on Twitter is no longer a priority as they have accounts there. Their attacks are still going strong on Visa's web site, and now are looking for the next target.

Update #11: Anonymous' IRC server briefly was down due to an overload on their servers by users. The group is still trying to come up with a new direction to go into, something other than DDoSing.

Update #13: PayPal has come under attack, resulting in a downed site for some and just very slow for others. Anonymous is currently attacking both Visa and PayPal.

Update #14: Attacks on PayPal seem to have ceased, with focus still on Visa.

Update #15: Attacks will begin to wind down on Visa as Anonymous moves to their next target, PayPal after getting some things together. Anonymous' reasoning is that they would legally have to return the frozen funds anyway.

Update #16: Anonymous will begin attacks on PayPal at 10 P.M. EST, setting PayPal as the new target.

Update #17: PayPal has come under attack and been brought down.

Update #18: PayPal appears to have made a comeback and is reporting as online for many users. Disorganization from Anonymous left users confused as to which part of PayPal to target, leaving not too much of an impression. If you are still having troubles, try connecting to "www.paypal.com" instead of just "paypal.com."

Update #19: Anonymous has changed their target from PayPal's front end to their API servers which are used for processing payments. This does not seem to be globally down, although some regions are affected by it. Anonymous has also upgraded the tool they use to DDoS sites and are in the transition phase of moving everyone over to it.

Update #20: Tweets from multiple Anonymous sources claim the next target will be Amazon in about two hours. This is in response to Amazon now selling the WikiLeaks Cables. They have continued focus on PayPal.