Microsoft has released an early beta build of Vista SP2 to testers according to those familiar with the beta program.

In a posting to The Hotfix forums, members have claimed that Microsoft have released a batch file which enables the SP2 download from Windows Update. The download weighs in at over 290MB and references the support article placeholder put online 2 weeks ago. 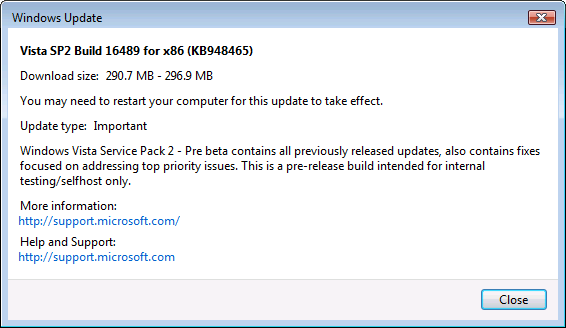 Microsoft recently wrote to potential testers to offer them the SP2 build within 4 weeks and it appears the company may have released this earlier than expected.

It's expected that SP2 will include Windows Search 4, along with Bluetooth wireless support (including latest BT 2.1 fixes), support for the new VIA 64-bit CPU and additional application compatibility updates.

Early feedback from testers noted "Vista feels faster now!" and "it feels good so far...stable and all".

Update: This build is not currently released broadly to all testers and may have leaked out from a small set of testers or internally from Microsoft.

Update 2: According to a Microsoft source, the package on Windows Update today are pre-beta bits, not the actual beta that has undergone more testing. It was added to ensure the windows update process was setup correctly.