With Microsoft and Verizon set to finally reveal the outcome of Project Pink on Monday, here we give you a preview of what to expect and try and explain just what this mysterious project is, and why it might have failed before it even launches...

Back in February 2008, Microsoft agreed to acquire Danger for an estimated $500 million. Danger manufactured the Danger Hiptop smartphone, also known as the T-Mobile Sidekick - a device with a young user base and many features centered around social interactions, things which Microsoft's Windows Mobile offerings seemed to be lacking.

Following the acquisition, Danger was integrated into the fairly recently formed Project Pink team in the Premium Mobile Experiences (PMX) group at Microsoft, led by Roz Ho. PMX itself is part of the Mobile Communications Business (MCB) unit, which is part of the Entertainment and Devices Division - the same division as Zune and Xbox. Danger co-founders Matt Hershenson and Joe Britt joined Microsoft, whilst the other, Andy Rubin, went on to co-found Android, which was ironically then acquired by Google to form the basis of their Android mobile operating system.

The initial idea of the Pink team seemed to be to make a Zune phone (despite the idea always being rejected officially by Microsoft) by taking the Zune functionality and adding it to Windows Phone-like software. It seems somewhat strange then that the Danger staff continued to work out of their old offices and the Pink group worked completely separately of Windows Mobile and Zune.

But the acquisition gets even stranger. The operating system on the existing Danger device was based on Java, something which Microsoft stays well clear from. So if they couldn't build on what they were getting, why did Microsoft just buy a business - which had been losing money - for half a billion dollars? Apparently the deal was aimed at gaining some new talented and experienced developers and managers to try and take the Pink project forward, with Microsoft planning to use Danger's basic ideas to build a new experience.

However, it has since emerged that almost as soon as the deal had been done, much of Danger's talent were given lower down jobs within the PMX group and Microsoft revealed that it did not want to take the same creative path as Danger had. 300 employees joined Microsoft as a result of the acquisition yet another 200 were also brought onto the Pink team from elsewhere. When Microsoft decided to cut jobs in an attempt to reduce costs, many former Danger employees were fired, and many others have chosen to leave.

Despite initial suggestions that Pink phones may be branded as either Zune or Windows Phone, it now seems that they may not even say Microsoft on them. However, as with the Zune and Xbox teams in the same Entertainment and Devices Division, and unlike with Windows Phone 7, Microsoft will have complete control of the hardware of the devices. Their manufacturer of choice is expected to be Sharp, who also made the hardware for many of the old Danger devices.

Compared to Windows Phone 7, Pink devices will offer a more integrated and closely designed experience between the hardware and the software. They are expected to be lower end of the market phones than Windows Phone 7 devices whilst providing some of the main features, albeit in a more basic way. But will the two platforms compete against each other too much? With Pink only on devices that Microsoft makes and Windows Phone only on devices that it doesn't, it will be hoping to avoid the difficult clash that Google face with the Nexus One where the OS creator competes with its own rival device directly with those that it licenses to.

There may be a fine line between doing this successfully and annoying other manufacturers that use Windows Phone, but Microsoft see Pink as a phone more aimed at the young and as users grow older they could easily switch over to a Windows Phone. The two platforms will not be that similar, however. It is thought that the original plan was to base the Pink OS on Windows Phone 7, but with that taking longer than expected it had to be based directly on Windows CE (as Windows Phone 7 also is) and doing this all themselves required more work and took the team longer. As such, although there are similarities between the two they are thought to be unable to run the same applications.

This wasn't the only delay faced by Pink. Technology from other product teams, such as the Zune team, is key to the devices and many bits external to the Pink group were not done on time, creating further delays. With one source revealing that the project was two years behind schedule at one stage, this meant that features had to be cut from the product, with an app marketplace, games (powered by XNA), a calendar and an alarm clock all apparently being dropped, in what will surely be an unsuccessful move. When Pink was finally expected to hit the spotlight at CES in January it was a no-show. Presumably held up by more delays, the next opportunity for it to be shown off was at MWC, but Microsoft decided to focus themselves at that event entirely on the new Windows Phone 7.

Within the development team, many are said to "hate the product" and feel that their product was never intended to ship but more to "challenge [the Windows Mobile 7 team] and upset them into competing." Having to design 4 different end-products is also said to have slowed the development down. The two Turtle and Pure phones were both to be made as UMTS and CDMA as well, Turtle and Pure being UMTS and Pride and Lion being the same respective models as CDMA (from what I gather). It is more complex than you might think to develop for both at once, especially when there are two different devices for each. It now seems that only one set of the models will exist, with either CDMA or UMTS support being dropped.

So what of the actual phones themselves. Whilst they may have ended up more as feature phones than smartphones, they still have some decent features. These are meant to be social devices so on top of the standard phone features they should support email, web browsing, Windows Live, AIM and Yahoo! instant messaging, the ability to publish photos directly to Facebook and MySpace, the ability to set your status on Twitter, Facebook and MySpace, and access to Zune's music service. They can presumably be synced through the Zune PC software and should both feature a headphone jack and a camera. The Turtle is expected to have a screen resolution of 320 x 240 and the Pure being larger at 480 x 320.

Project Pink seems to have been plagued with problems from day one, some of which could eventually lead to its downfall. On Monday we should finally see whether these have been ironed out and Microsoft have managed to produce the youth-friendly social phone that they set out to do, and whether it is at a high enough standard to do well with customers and provide Microsoft with their first real fightback in the consumer phone market. 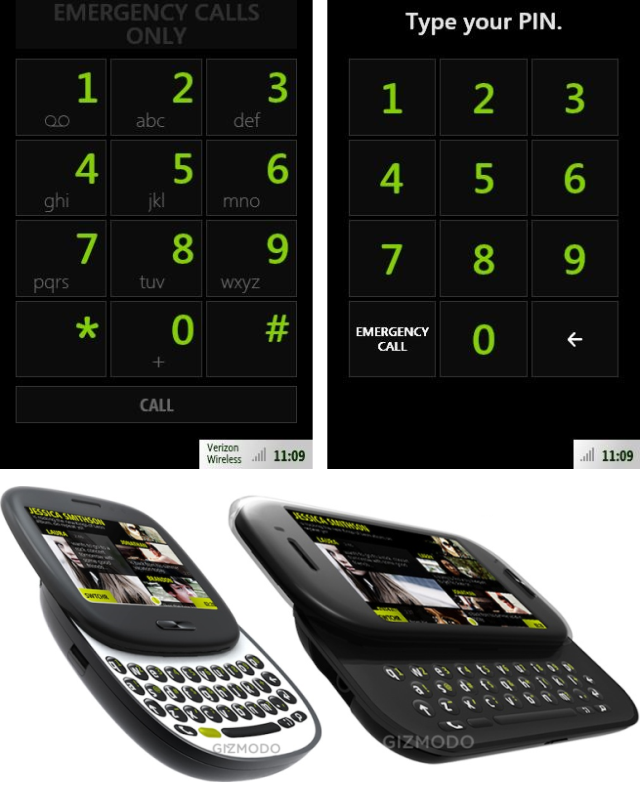 Thanks to Apple Insider, Microsoft PressPass, Conflipper, Mary-Jo Foley and MobileCrunch, amongst others, for information used.