Remember when you first heard of the term "Wi-Fi"? That is, of course, the more well known trademark for the IEEE 802.11 wireless standardization. W-Fi certified hardware is now inside nearly all notebooks, tablets, smartphones and can even be found in some Japanese vending machines. Its speed has also gotten faster over the years; the current standardization version is 802.11ac, which is expected to become official in early 2014 and in theory can support speeds as fast as 1 gigabit per second. 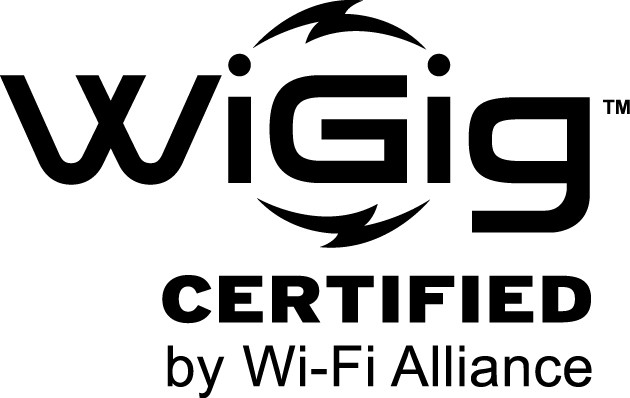 Now the Wi-Fi Alliance, which certifies all Wi-Fi hardware, has announced a new program to approve products that have the upcoming WiGig standardization. The effort even comes with a new logo, as seen above. WiGig uses the 60 GHz spectrum to deliver data speeds of between 1 Gbps to 6 Gbps. However, the range of WiGig is very short. While a Wi-Fi signal can be detected in an entire house, a WiGig signal is usually confined to the space of a single room.

WiGig products will most likely be used to transfer content from a laptop or tablet to a big screen TV. It could even allow for PCs to connect wirelessly to monitors. The Wi-Fi Alliance has announced partnership with both the USB Implementers Forum and the Video Electronics Standards Association so that their products can work with the WiGig standards.

While WiGig does have the support of the powerful Wi-Fi Alliance, it's not the only such standardization that is looking to offer these kinds of high speed wireless data and video features. WirelessHD has been around for a while, but has yet to catch on in a mainstream way, and support for the Wireless Home Digital Interface, or WIDI, has also not made much headway. In short, it may be a while before the battle between these short range wireless standards has a clear winner.