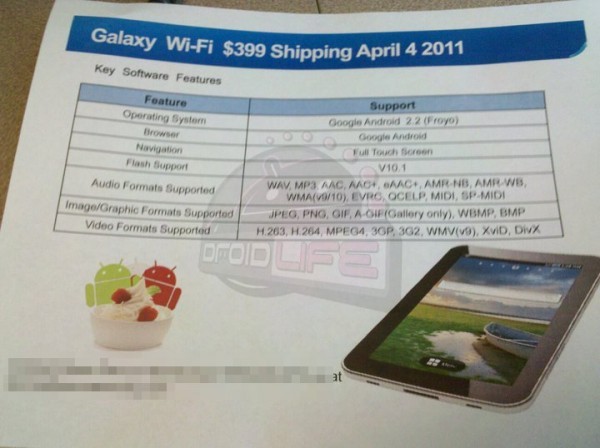 The folks over at a Droid-Life are reporting that Samsung may be ready to release the WiFi-only version of the Galaxy Tab in April for just under $400. One of their users, while recently at a technology fair, came across a Samsung representative who handed them a product flyer, on it we can see the information states that the 10.1 inch, Android 2.2 device will launch on April 4 for $399.

Considering the recent news about the Android 3.0 powered Tab, it is unclear why Samsung is releasing this version, especially when stiff competition is rumored to be coming out in the next few months, including the Motorola Wifi XOOM.

Samsung seems to be pushing their tablets hard in a market which is dominated by Apple. "We believe, as the introduction of new device, it was required to have consumers invest in the device. So therefore, even though sell-out wasn't as fast as we expected, we still believe sell-out was quite OK."

Out of the original two million units the Korean company sold to carriers, 15% were returned. It was not a good start, but future devices may help the company to take some focus away from Apple.