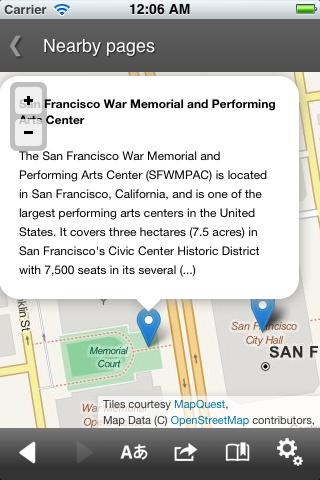 A few days ago, we reported that OpenStreetMap, an open source internet mapping project that gets direct support from Microsoft, was slowly but surely making some inroads in the mapping marketplace. Today, it was announced that OpenStreetMap had secured a major new agreement with Wikipedia, another service that relies on volunteers and open source development.

In a post on the official Wikipedia blog, the organization announced that its apps for Android and iOS would no longer use Google Maps for its nearby view feature in favor of OpenStreetMap. The post stated:

This closely aligns with our goal of making knowledge available in a free and open manner to everyone. This also means we no longer have to use proprietary Google APIs in our code, which helps it run on the millions of cheap Android handsets that are purely open source and do not have the proprietary Google applications.

While the actual map data comes from OpenStreetMap, the Wikipedia apps will use tiles provided by AOL's MapQuest.

The blog post also announced that since the launch of the Android Wikipedia app in January, it has had over 2.25 million copies installed and generated 23 million page views per month. New versions of both the Android and iOS versions of the app have also been released this week with a number of new features. Users can expect updates to both apps every two weeks or so.