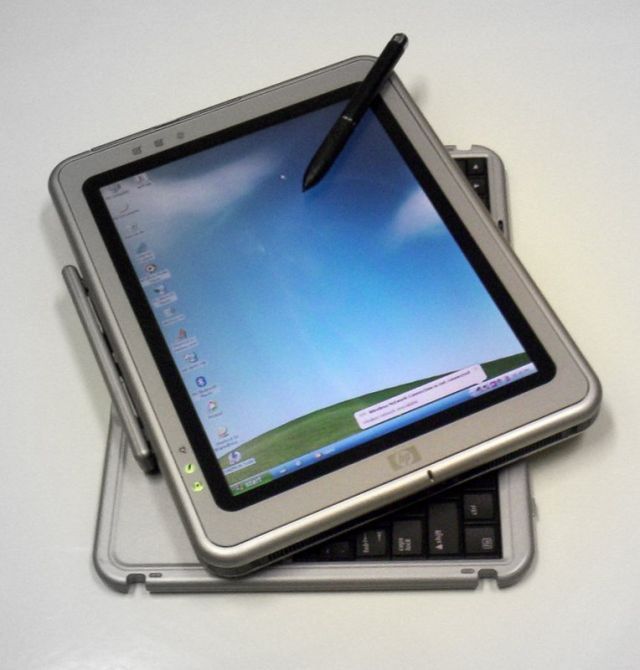 Remember Comdex? Yes, 10 years ago the computer trade show was the place to be for companies to introduce new PC hardware. Comdex is now just a memory, a victim in some ways of the Internet boom and bust that happened in the early part of the last decade.  At the 2001 edition of the trade show, held 10 years ago this very week, Microsoft co-founder and chairman Bill Gates made a keynote address that, among other things, introduced the public to what the company called the Tablet PC.

In Microsoft's official press release that centered on Gates' speech, it stated flat out, "Gates predicted that the Tablet would become the most popular form of PC within five years." Gates showed off working prototypes of the Tablet PC design, running the just launched Windows XP operating system. The prototypes came from PC makers like Acer, Fujitsu, Toshiba and even Compaq (later to be acquired by HP).

Microsoft's Tablet PC version of Windows XP was also introduced at the same time. In Microsoft's own FAQ about the variant of the Windows XP operating system, it admitted that the Tablet Edition had a number of additional features including an on screen keyboard, support for speech recognition, screen rotation from landscape to portrait and more.

Consumers were first able to purchase PCs with Microsoft's tablet design in 2002. But the truth is that the design never caught on with consumers. PCs with the Tablet design tended to cost more than comparable notebooks with the normal physical keyboard and non-touch screen monitor. Another issue is that Microsoft thought that people would use an electronic pen or stylus to access the Tablet PCs user interface. They didn't seem to think at the time that the human finger was the best way to handle a touch screen UI.

Finally, and perhaps most importantly, was the fact that despite the many additional features put into Windows XP Tablet Edition, the truth was that Microsoft tried to turn a PC operating system, made to work with a keyboard and mouse, into something that it wasn't designed to do. It didn't want to make the effort to create something that was made for the Tablet PC from the ground up.

Cut to a few years later and the now legendary shut down of Microsoft's Courier project. Were there problems with the design of this twin screen tablet device? Sure. Perhaps the biggest one was that the team thought of the Courier as a companion to a notebook, rather than a replacement for it. It also apparently didn't have basic PC applications such as an email client. The end result was that Gates wasn't impressed.

The shut down of the Courier project happened in 2010, around the same time that Apple launched the iPad. Remember the jokes in the press about how the iPad was just a really big iPhone? But Apple CEO Steve Jobs knew that the hardware and software that were developed for the iPhone could be used to create a touch screen tablet PC that could truly serve as a replacement to a notebook for most people. It didn't hurt that the iPad had a price that was around the same as most Windows-based PC notebook. The end result? Apple created a new consumer electronic product line with the iPad. It's sold millions of units and generated lots of copycat products from others.

Now Microsoft is saying that its upcoming Windows 8 operating system will be a full-fledged touch screen experience for tablet PCs but will also work with the typical keyboard and mouse controls for desktop and notebook PCs.

We know that Microsoft wants in on the growing tablet market. It certainly doesn't want to be left out of Apple's party (and to a smaller extend from Google's Android as well). Our main concern is that Microsoft is trying once again to have it all. It's making its new Windows 8 operating system as one that will work for nearly everything.

If that kind of a system really worked, then Apple would replace its Mac OS operating system with one that was similar to the iOS system. But they didn't. Apple knows that PCs and touch screen devices are different. Trying to meld the two together just doesn't work.

The odd thing is that Microsoft already has a touch screen OS that on the surface would work perfectly with a tablet device: Windows Phone 7. Microsoft has been promoting the heck out of the OS in the past several weeks thanks in part to the "Mango" update that added a number of cool new features to the OS.

But Microsoft seems to think that Windows Phone 7 should only be used on phone, not on a tablet product. According to Microsoft's thinking, the tablet should only have a PC interface. Yet it would not be a massive stretch to alter Windows Phone 7 to work on a large tablet device. In fact it may be a better fit than Windows 8 would be.

But at the moment, Microsoft seems to be going down the same road as it did with the Windows XP Tablet Edition. It wants to have its OS cake and eating it, too.

While the failure of Microsoft's Tablet PC isn't totally Windows XP's fault, Microsoft's lack of vision for the product was certainly a huge factor. We hope that the company has learned some lessons from the past 10 years; not just from its own mistakes but from Apple's successes. While Windows 8 will almost certainly be a success for the desktop and notebook crowd, the tablet PC business could turn out to be harder to crack. Microsoft did make a good move in deciding to allow ARM designed processors to work with Windows 8. But will it be enough? In the coming months we should learn if Windows 8 for tablets will be a success or just another lost opportunity for Microsoft to expand the OS beyond its typical borders.