Windows 10 has seen steady adoption among Steam users ever since its release, and the OS is getting closer to toppling Windows 7 from the top with each passing month. The Steam survey results for the month of December revealed that the OS had managed to grab 32.5 percent share among its users, and now that stands at over 34 percent, while Windows 7 is still the leader with more than 42 percent penetration. 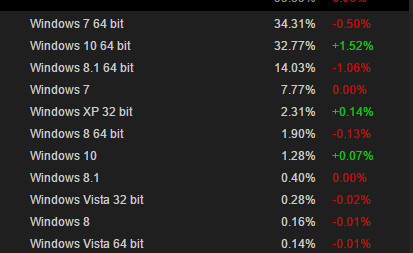 According to the results of the January 2016 Steam survey, Windows 10 64-bit increased its market share by 1.52 percent while the 32-bit version grew by 0.07 percent. The most-used OS among Steam users is still the 64-bit version of Windows 7, which holds 34.31 percent share. However, it could lose its crown within a month or two if the current rate of decline continues. The 32-bit version of Windows 7 is still being used by 7.7 percent of the users but that number hasn't changed in a couple of months.

It has been observed that Windows 8.1 users are switching to Windows 10 at a more rapid rate, which might be in part due to more compatible hardware in comparison with Windows 7 systems. One interesting revelation from the last two survey results is the increase in Windows XP users but the overall share of the OS is quite low.

With Microsoft updating Windows 10's status to "Recommended" update for Windows 7 and 8.1 users, the adoption could get faster in the near future. But there is still a long way to go for the OS among non-gamers, as Windows 7 still has a huge lead globally there.