Microsoft has been slowly updating nearly every aspect of Windows 10 but one area that remained unchanged, for many years, is the UI used during installation. In newer builds of Windows 10, the UI has finally updated and while I do not have an actual picture to show you, since the layout is quite basic, we have mocked up, identically, what current versions look like. To be clear, I have seen this UI and it looks like what you see below.

The new interface focuses around a center ring that acts as a progress bar and along the bottom of the UI are the various steps of the installation process. The top of the screen says "Installing Windows 10 Technical Preview" and below that "Your PC will restart several times. Sit back and relax". 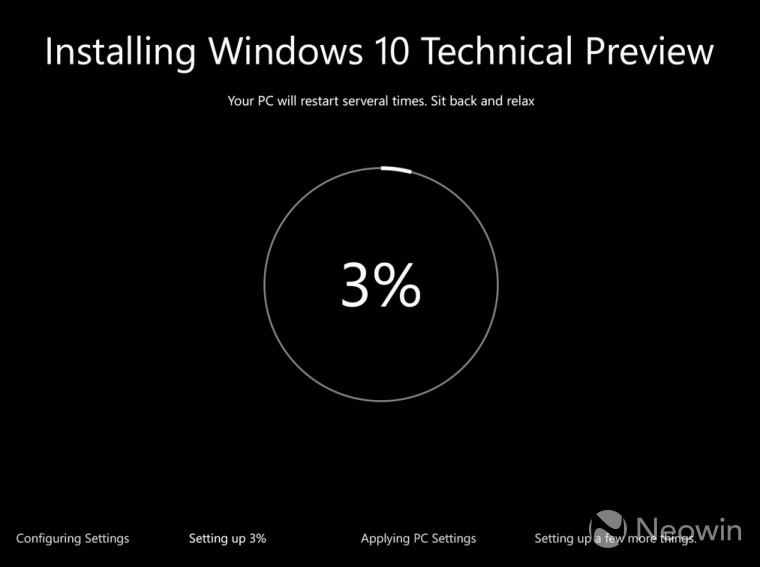 Below that is a large ring that acts as the progress bar for the installation process and it lights up as the install works its way towards completion.

Below the ring are the words are "Configuring Settings, Setting Up, Applying PC Settings, Setting up a few more things". At this time, the screen is quite basic but is significantly different than the previous setup dialog. Knowing this, Microsoft could be at the very start of updating this progress interface and this may be the start of more changes coming to these screens.

We are not sure when Microsoft will be releasing the next build of Windows 10 or if this screen will make it into the next public release but it is clear that the company is changing every aspect of the UI before the OS reaches RTM.