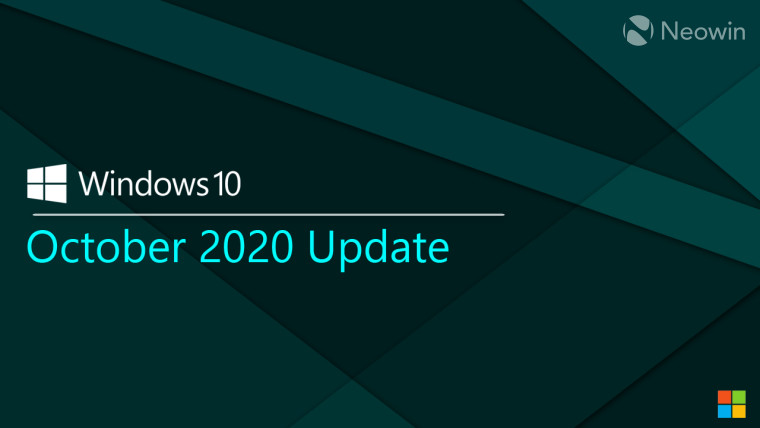 For the past few months, Microsoft has been working on the next feature update for Windows 10, the one to follow up the May 2020 Update. We’ve covered the changes in every Windows 10 feature update since the May 2019 Update, so of course we're also going to go over the next one. But before we do, if you missed any of the previous updates, you can use these links to check the additions from the past few releases:

Moving on to the next update, Microsoft is changing the way it designates new versions of Windows 10, so instead of being version 2009 or 2010, Microsoft is calling it version 20H2, with a more friendly name being October 2020 Update. Instead of indicating the month the update was finalized in, the version now just indicates whether the update was released in the first or second half of the year. This should help alleviate some questions users have had, since the month indicated in the version number was almost always different from the month used in the friendly name.

Windows 10 version 20H2 is a relatively small feature update, just like version 1909 was last year. If you’re running version 2004, this update will simply be an enablement package, essentially turning some features that are already baked into version 2004, but turned off. Because of that, users on version 20H2 will get all the same monthly cumulative updates as version 2004. This also means there’s not a lot of new features, but there are some notable ones nonetheless. Let’s take a look.

Easily the most immediately noticeable change in this release is in the Start menu, especially if you have tiles pinned to it. Microsoft has added theme-aware tiles, which means they’re now using a transparency effect instead of being a solid color. Not only that, they will now follow your system theme – light or dark – instead of always being colored, so you can have monochrome tiles to help app icons pop. You can also enable color for the Start menu in Settings -> Personalization -> Colors, and tiles will be colored while retaining the transparency effect.

There are also some improvements to the All Apps list, though. App icons are no longer forced to fit into colored squares, so not only are the icons themselves bigger, but the list as a whole looks a lot cleaner. Plus, there’s a new icon for folders, which falls much more in line with Microsoft’s design language.

Moving down to the taskbar, there’s a small change for new accounts, which may now see some different apps pinned to the taskbar when they login for the first time. Usually, Windows 10 pins Edge, File Explorer, Microsoft Store, and Mail icons to the taskbar out of the box. With this change, you may see some different ones, like the Your Phone replacing Mail if you have linked an Android phone to your Microsoft account, or the Xbox app if you have a gaming PC. This won’t affect you if you’re just updating Windows 10, though, only new users starting with this version, such as with a clean install.

There are also some changes for 2-in-1 devices and the tablet experience, as Microsoft continues to deprecate the traditional tablet mode. When you detach a keyboard or rotate it behind the screen, you’ll no longer see a prompt to switch to tablet mode proper, and instead you’ll see a new experience for tablets, which increases spacing between some items and adds a touch keyboard button to the taskbar to make the touch experience better.

This tablet experience was already available in Windows 10 version 2004, but unless you had a Surface device, you’d still see the tablet mode prompt, and saying no would take you to the new tablet experience. You can re-enable the prompt in Settings -> System -> Tablet if you want to use the classic tablet mode.

On this note, there are a couple of other changes. If your device doesn’t have a touch screen, the Action Center will no longer show the tablet mode button so you don’t enable it by accident. Microsoft has also improved the logic so when you turn on the computer, it will deliver the right experience based on whether you had tablet mode enabled at the last shutdown and if there’s a keyboard attached.

Another thing that’s new in this update is that it’s the first version of Windows 10 to ship with the new Chromium-based Edge, though you’ve been able to install it for a while. However, with the new Edge being bundled into the operating system, there are some new features to improve the integration between the two.

On the taskbar, there are some improvements to pinned sites. If you pin websites to the taskbar using Edge, the taskbar icon will now let you keep track of all the tabs you have open for that website, even if they’re in different Edge windows. The feature requires version 86 of Edge, which is currently only available in beta, but it should be promoted to the stable channel by the time Windows 10 version 20H2 is generally available.

Another Edge-related improvement is in the task switcher, which you access with Alt+Tab. If you have multiple Edge tabs open, you’ll now see each one individually listed in the task switcher, so you can more easily switch to it. By default, up to five Edge tabs will be visible, but you can change this in Settings -> System -> Multi-tasking, so you can see just three tabs, every tab, or only open windows.

Microsoft has made some notable improvements to the way notifications are presented in this update, which makes them a lot easier to understand. For one thing, the name of the app and its icon are now shown at the top, whereas the previous design only showed the app name in small text under the notification content (and even that only appeared for some apps). On top of that, there’s a new X button to immediately dismiss notifications. Before, you’d only be able to hide the notification into the Action Center, and then dismiss it from there, but now it can be dismissed directly from the notification toast.

You’ll also notice that the gear button to adjust the notification settings has been replaced with a three-dot button, albeit only in notification toasts and not in the Action Center itself.

A smaller change can be found in the Settings app, specifically in System -> About. Microsoft has made this the default experience for viewing system information, replacing the equivalent page in the old Control Panel. Links to additional settings can be found here now, and there’s a new button to copy your system information in case you need to share it with someone.

Update: With the update being available now, Microsoft has also announced that there's a new way to access refresh rate settings for your monitor. You can find them in the Settings app now, by going to System -> Display, then choosing "Advanced display settings at the bottom of the page".

Finally, for businesses and IT administrators, the Modern Device Management (MDM) experience for local users and groups now allows for granular control of policies for groups, just as you would on devices with on-promises Group Policy management.

The Windows 10 October 2020 Update, or version 20H2, was recently brought to the Release Preview channel of the Insider program, and Microsoft is getting ready to release it to general users in the near future, though a date isn't set yet. As usual, feature updates won't install automatically, but it should show up as an optional update in Windows Update, and you can install it manually. For devices running older versions of Windows 10, which might be nearing the end of support, then the update will eventually be pushed to your device so you can keep getting security updates.

What's your favorite change in this release? Will you be installing it as soon as possible? Let us know in the comments!