Microsoft has released a new Windows 11 preview build today for Insiders on the Dev channel, The new release, Build 22563 brings the Tablet-mode taskbar which leaked a couple of weeks ago. Aside from this, there are also changes to the group policy for managing Windows Update, and more.

All the new feature additions are given below:

We’re introducing a new taskbar state that’s specifically designed to make you feel more confident and comfortable using your device as a tablet. Your taskbar will automatically transition to this optimized version when you disconnect or fold back the keyboard on your 2-in-1 device. This feature only works on devices that can be used as tablets. It does not work on laptops or desktop PCs.

To see if this feature is available on your device, navigate to Settings > Personalization > Taskbar > Taskbar behaviors where a new setting called “Automatically hide the taskbar when using your device as tablet” will be shown and set to on by default.

FEEDBACK: Please file feedback in Feedback Hub (WIN + F) under Desktop Environment > Taskbar. See the known issues section below for a set of known issues for this feature.

If you’ve already customized your Widgets board, all your pinned widgets will be exactly where you’d expect them to be, your existing customizations won’t be lost.

This release focuses on making widgets discoverable from the feed and over time we plan to make the feed even more personalized.

FEEDBACK: Please file feedback in Feedback Hub (WIN + F) under Desktop Environment > Widgets OR by clicking on your profile picture on the Widgets board and choosing “Give feedback” toward the bottom above the version number. See the known issues section below for a set of known issues for this feature.

For IT Admins in education, we have a new policy built with you and your students in mind. Starting with this build, you will finally be able to turn off all Windows Update notifications that might distract your students during the school day. You will be able to provide this better experience while staying compliant as the notifications will start to show again if user action is needed and the devices reaches the deadline, though hopefully most devices are able to automatically restart overnight when the student isn’t there.

Here are some more changes and improvements in Build 22563:

Here are all the fixes in this release:

The Dev channel release is now moving to the "NI_RELEASE" or Nickel branch in preparation for the major feature update to Windows 11 later this year. You can find our coverage of what's new in this Windows 11 build here.

Update: Dev channel build 22563 gets another new feature today in the form of more options related to Bluetooth devices inside Quick Settings. The release note for the new feature says:

We are beginning to roll out the ability to more easily manage your Bluetooth devices directly within Quick Settings, including the ability to connect, disconnect, and see battery level for supported devices. 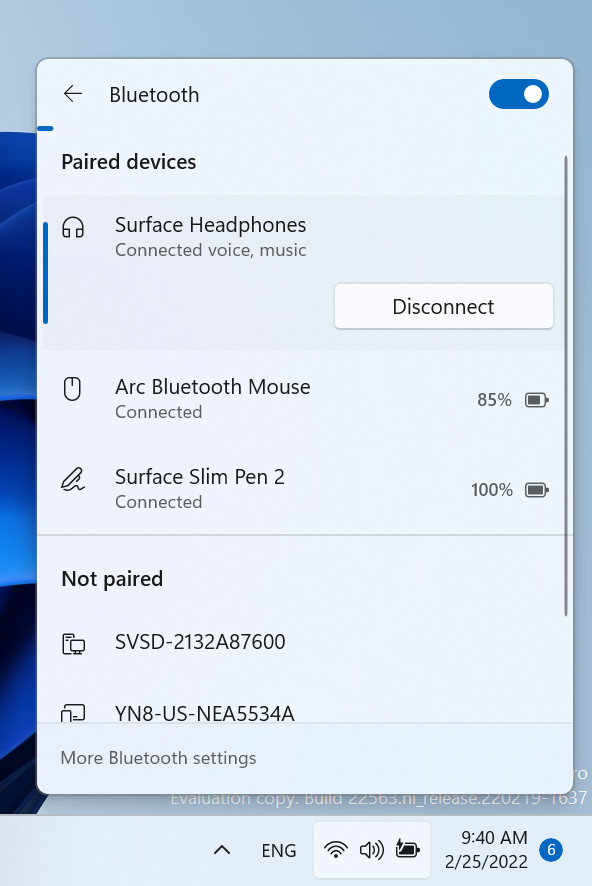