A new "feature" in Windows 7 has been revealed today, by Ina Fried over at CNET. Being dubbed "god mode", the "feature" is actually pretty handy for power users. The hack allows you to pull all of your PC's control panels into one standard class view folder.

Here's how to enable this hack:

And there you have it, a folder with all of your control panels for your PC. Check it out: 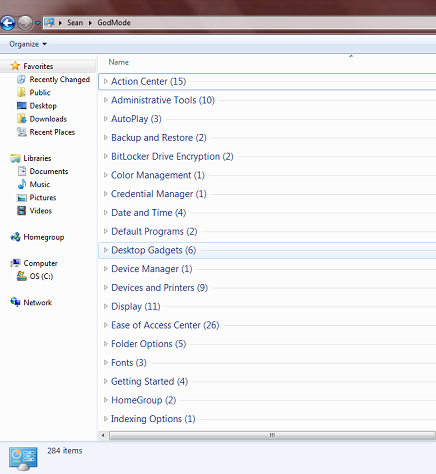 Is this feature really a "god mode"? Not really, as our friend Brandon Live pointed out today:

"First, you've discovered a documented feature of the shell whereby filesystem folders can be easily made into namespace junctions, as described here on MSDN. Basically, any folder named <DisplayName>.<CLSID> will show up with just the <DisplayName> portion visible in Explorer, and navigating into the folder will take you to the namespace root defined by the <CLSID> portion of the name. The second thing you've discovered is the "All Tasks" folder. This is a special shell folder which is used as the source of the "Control Panel" search results seen in the Start menu."

Kudos to thejohnnyq for the news tip.