Almost anyone who has been following the development of Windows 7 knows that it's currently kernel version 6.1. But all that could be set to change, at least if an obscure MSDN page is to be believed.

In a page describing device installation with the Windows Driver Kit, the documentation shows "Msft.NT.7.0" being used as a label to specify drivers only for use with Windows 7.

Previously, Neowin reported that Mike Nash, Corporate VP of Windows Product Management, posted on on the Windows Vista Team Blog with the official explanation that Windows 7 would be kernel version 6.1.

"So we decided to ship the Windows 7 code as Windows 6.1 - which is what you will see in the actual version of the product in cmd.exe or computer properties. There's been some fodder about whether using 6.1 in the code is an indicator of the relevance of Windows 7. It is not. Windows 7 is a significant and evolutionary advancement of the client operating system. It is in every way a major effort in design, engineering, and innovation. The only thing to read into the code versioning is that we are absolutely committed to making sure application compatibility is optimized for our customers."

Has this changed? Is "Msft.NT.7.0" just a way of expressing Windows 7 and not kernel version 7, if not, why not just say NT.6.1 in the INF? Or is the documentation incorrect? It remains to be seen.

Windows 7 RC is expected to go public on May 5, so hopefully that will reflect this change. 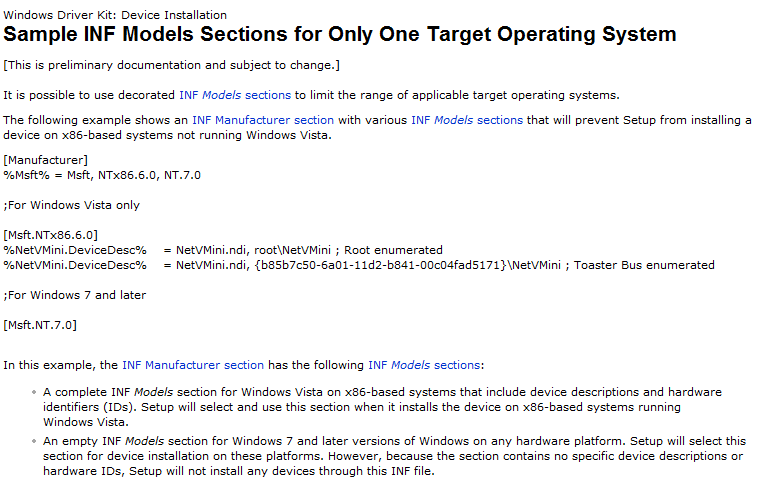 (Thanks to Neowin member jamesVault who pointed out this page in our forums.)