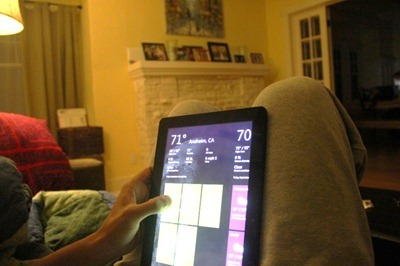 Microsoft has designed the Windows 8 Metro interface to work on tablet devices in addition to PC and laptops and because of this added platform for the operating system, it also needs to work well when a tablet owner is using it in both landscape and portrait display modes. In the latest entry on Microsoft's official Windows 8 blog, Microsoft's David Washington writes about how he and the Windows 8 user experience team are working to optimize how the OS will look on tablets in both positions.

Washington writes, "We spent a considerable number of hours studying people as they used tablet devices in our usability labs as well as in their own homes. We’ve watched people who were already familiar with tablets, and we’ve watched people new to these form factors get started, and we stayed in touch with them for months afterwards."

The company examined how tablet users gripped the product, how they interacted with a tablet's applications, where in their home they used the tablet and lots more. In the end Washington writes, " ... there’s no one way to hold a device and people naturally seek to find a comfortable position and orientation that feels right for what they are doing with the device at the time." 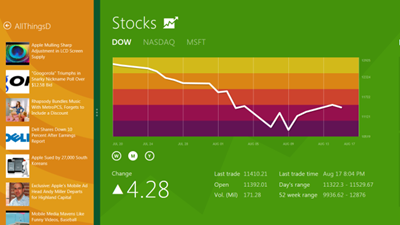 When Windows 8 is in the landscape position on a tablet, Washington says, "We found that a comfortable posture for using a tablet in landscape is to hold in both hands and touch the screen with your thumbs. For this reason, we’ve designed the majority of the experience to be easily accessible under your thumbs. We also optimized the system to scroll horizontally, which feels fast and fluid in landscape as well as in portrait mode." Most people will use the landscape position when Windows 8 is running on a desktop PC with a monitor or on a laptop.

When a tablet running the OS is in portrait mode, it's likely that the users will be reading news, looking at email messages or scrolling through pictures in a portrait gallery. Washington says, "We tuned the system experiences like the keyboard, file picker, and charms to work great in portrait as well as landscape. We wanted to make it so you don’t need to relearn the system when you switch to portrait mode; it just works."

What about the transition between landscape and portrait mode and vise versa? Washington says the Windows 8 team is striving to make that move as seamless as possible. He says, "Before the rotation starts, the system waits for the accelerometer to stabilize to prevent accidental rotations. We also wanted to keep you in control of the rotation experience, so that it wouldn’t be triggered accidentally. We introduced a hardware orientation lock to 'override gravity' and keep the orientation the way you want it."

Windows 8 is also being made to work on different sizes of screens, whether they are 4:3 displays all the way to 16:9 widescreen monitors. Washington says, "Our scaling platform enables Windows and apps to seamlessly adapt and reflow content to of these different screens and make use of the space. You can use many of these devices in either portrait or landscape." The minimal resolution for Metro style apps to run in Windows 8 will be 1024x768.

Washington says that the the minimal resolution that will support all of Windows 8's features will be 1366x768. He writes, "We chose this resolution as it can fit the width of a snapped app, which is 320px (also the width designed for many phone layouts), next to a main app at 1024x768 app (a common size designed for use on the web). These limits cannot be changed, by the way. Washington says, "We are breaking from past practices in not providing a workaround for this, given that the main motivation is to make sure Metro style apps are designed to function fully at a specific published resolution."

While most Windows 8 app developers will likely support landscape viewing modes for their creations, Washington writes, "However, if an app’s experience could support both landscape and portrait, supporting the portrait view is just an incremental amount of layout work."